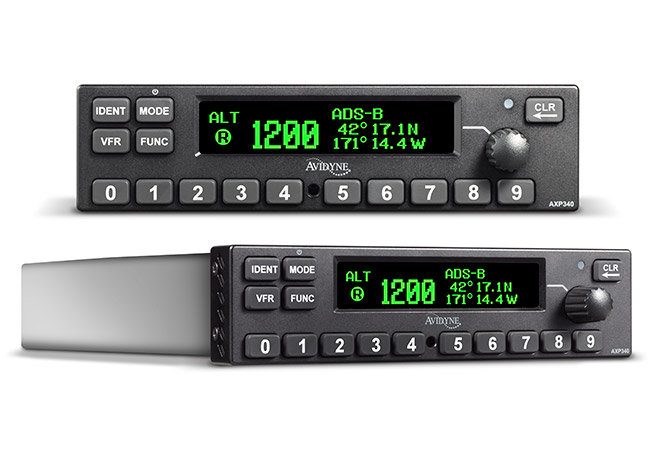 Avidyne Corp. has secured technical standard order (TSO) approval for its AXP340 transponder, a plug-and-play unit that can be installed as a slide-in replacement for Bendix/King legacy transponders including the KT 76A.

Priced at $3,995 (with an optional connector and mounting kit for $200), the AXP340 is a Mode S transponder that broadcasts an extended squitter signal at 1090 MHz. When coupled with a Wide Area Augmentation System (WAAS) GPS, a Mode S transponder is one equipment combination that satisfies the coming FAA mandate that will in 2020 require Automatic Dependent Surveillance-Broadcast Out (ADS-B Out) capability for aircraft operating in controlled airspace.

The transponder, like other Mode S transponders, can receive high-precision position data from a WAAS GPS and transmit that data to ground stations and other aircraft equipped with ADS-B In capability. The resulting three-dimensional, real-time image of all ADS-B Out-capable traffic, supplemented by radar, will become the primary traffic separation tool (available to both pilots and controllers) under the FAA NextGen airspace modernization plan.

“ADS-B is key to the future airspace plans in the U.S., Europe, Australia and other parts of the world, and Avidyne is committed to providing innovative ADS-B avionics products for general aviation,” said Dan Schwinn, Avidyne president and CEO, in a news release. “As a stand-alone installation or as a part of a complete retrofit with our full line of panel-mounted avionics, the AXP340 provides aircraft owners with a reliable, easy-to-use ADS-B surveillance solution.”

The AXP340 integrates with Avidyne’s TAS-A series traffic advisory systems, which display traffic based on ADS-B In signals, including both ADS-B-equipped aircraft and others painted by ground radar in areas where radar and ADS-B ground stations are available.

The company model line continues to grow: Avidyne expects to earn certification this year for the AMX240 audio panel, the IFD 540 (a GPS, radio, and flight management system designed as a drop-in replacement for the Garmin GNS 530), and the IFD440 (designed to replace the Garmin GNS 430).