Get the app Get the app
Already a member? Please login below for an enhanced experience. Not a member? Join today
News & Media FSANA holds yearly conference

The Flight School Association of North America wrapped up its annual conference in San Antonio Feb. 7, capping off four days of seminars and networking events. Aero Chapters, a program for flight schools aimed at school-age kids, was the big announcement.

Seen as a way to nurture the next generation of pilots, Aero Chapters was created to help flight schools establish an after-school aviation club in their local area. It complements FSANA’s three other Aero programs—AeroCamp, AeroParty, and AeroSolo. 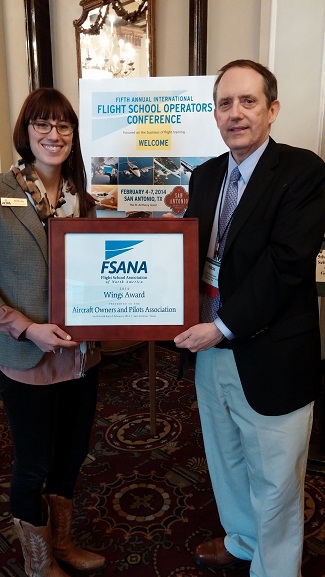 The rest of the conference focused on learning and networking opportunities for the 60 or so flight school operators in attendance. Former head of the National Association of Flight Instructors Jason Blair presented a seminar on getting the most from flight instructors, with tactics such as proper onboarding and setting specific expectations. There were also sessions on social media, and discussions about the merits of daily deals for flight schools.

FSANA presented a number of awards at the conference, including recognition for Mid Island Air Service, Double Eagle Aviation, Leading Edge Aviation, and Island Air Express. AOPA was given the first Wings award for service and commitment to the flight training industry. Brittney Miculka, AOPA’s senior manager of pilot community development, accepted the award. “We’re happy to support FSANA and their ability to bring flight schools together to network and exchange ideas so we can continue to be a strong flight training industry and community,” she said.

This was FSANA’s fifth annual conference, and it represents the seminal public event for the young organization.