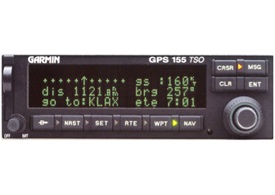 It has been 20 years since the FAA certified the Garmin GPS 155 for use as a primary navigation device for nonprecision instrument approaches, along with the other phases of instrument flight. That technical standard order (TSO) approval, awarded Feb. 16, 1994, was a world first.

“The GPS 155 TSO laid the groundwork for future aviation milestones and set the standard for product development, eventually ushering in the foundational technology for what is now referred to as NextGen,” said Carl Wolf, Garmin vice president of aviation sales and marketing, in a news release celebrating the GPS 155 anniversary.

The advent of GPS approved for departure, en route, and approach navigation ushered in a wave of new technology, and marked the beginning of the end of ground-based navigation aids, though legacy systems remain in widespread use and many will continue to operate following implementation of the NextGen airspace modernization program. GPS technology offered a new level of precision and safety for IFR pilots, and has allowed the FAA to create instrument approaches for many airports that did not have those approaches available by other means. The GPS 155 arrived in cockpits four years ahead of Garmin’s popular GNS 430 integrated navigation and communication system.