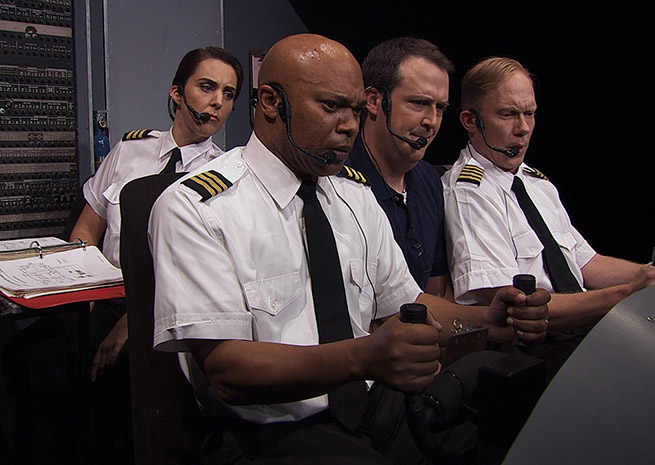 Six cockpits in crisis, six crews, six flights that ended in tragedy (or nearly so), comprise the substance and structure of “Charlie Victor Romeo,” a stage play and film named for the cockpit voice recorders which supplied the dialogue, rendered verbatim on both stage and screen. The film version, produced by the same artists who conceived the play, has won critical acclaim, and surprised its creators by finding an audience of pilots and other professionals who see in it lessons that can help teach people to manage crisis. Each moment of terror, captured on tape and recreated by actors, has become a teaching tool.

Written for and first staged in a 50-seat theater (a converted shoe store on the Lower East Side of Manhattan) in 1999, the play tells the story of aircraft emergencies, each scene set entirely in the cockpit. Some of these real-life flights ended with all lives lost, the words on tape having become echoes from the grave. Others, like the United Airlines Flight 232 crash-landing of a DC-10 in Sioux City, Iowa, left survivors (185 of the 296 people on board survived) despite near-impossible odds. Alfred C. Haynes, the captain of that ill-fated flight, came to see the play, and later joined the production company on two tours which included performances for medical professionals, followed by Haynes giving his own presentation on the lessons learned about crisis management—and how to cope with the stress and other effects in the aftermath of a crisis.

In 2000, the U.S. Air Force dispatched a team of photographers to videotape a live performance, and that first film version of “Charlie Victor Romeo” remains in use, helping to train military flight crews how to respond to emergencies. Over the years, it has been staged for numerous groups of aviators and health professionals, an object lesson in disaster management.

Robert Berger, who co-wrote the play with Patrick Daniels and Irving Gregory, and co-directed the film version with Daniels and Karlyn Michelson, recalled in a telephone interview that it came as a surprise when military and aviation professionals in those early audiences suggested the play could save lives.

“We were completely blown away by hearing things like that,” said Berger, a self-described “aviation geek,” though not a pilot.

“If you make a piece of art and it’s good, it’s one thing,” Berger said. “That this could be useful is another thing entirely.”

As a disaster film, “Charlie Victor Romeo” is likewise another thing entirely. There are no backstories, no scenes of final farewells or heroic homecomings, no computer animations of the moment of impact, no fireballs. (Hollywood producers wanted to go there, and Berger and company steadfastly declined.) It is the stage play captured on camera, each scene in turn a faithful reconstruction drawn from the audio record, word by word, and devoid of narration to explain terminology to the uninitiated. While the creators took great pains to get the details right, Berger said the actors were cast with no attempt made to represent the actual flight crews involved—in fact, they sought the opposite.

“What we’re trying to do is bring a psychological reality to the audience of what those people, what one may experience in a similar circumstance,” Berger said. “We wanted to sort of separate, conceptually, that this is the text that we are performing.”

Berger said the hope was to shift the focus away from what disaster movies and television typically focus on: the aftermath, the fire and debris, and, eventually, the investigation. The focus, instead, was on human beings responding to crisis, set in the moment. “Everybody is going to encounter crisis in your life,” Berger said.

The approach resulted in a pair of Drama Desk Awards in 2000, for sound design and “outstanding unique theatrical experience.” The film has made the rounds of international festivals, including the Sundance Film Festival, and recently completed limited runs in New York and Los Angeles. Berger said there are plans in the works for screenings in other cities, and the film’s website  and Facebook page include tools that allow users to sign up for a notification.

Audiences have emerged impressed with the relentless realism, including New York Times film critic A.O. Scott, who reviewed the movie in January. Berger said there has been another, unexpected reaction: Rather than causing or heightening aviation anxiety, for many in the audience, in particular people who have never set foot in a cockpit, it has done the opposite.

“You have a totally different understanding of who those people are and what they do that makes you feel better about how they’re going to take care of you,” Berger said. “Afterwards, people tell us that they’re less afraid. We totally didn’t expect that.”

(Scott, in his review, called the film “one of the most terrifying movies I have ever seen.” Berger said while the team did not set out to make a horror film, he was happy to get the positive review, nonetheless.)

There will be no sequel, per se, though Berger said he and his fellow producers and creators are willing and eager to adapt their brand of storytelling to similar projects aimed at training and teaching aviators, health professionals, or others whose job is to manage crisis when it comes. “We would love that opportunity.”

Ron Kaplan of Reel Stuff Aviation Resources has been chosen to help arrange screenings for professional and education groups, and “Charlie Victor Romeo” will also be shown in various venues across the country, dates and times to be announced.