A Jet Ranger for the millenium

With techno music thumping and lights flashing, Bell Helicopter revealed the 505 Jet Ranger X at Heli-Expo in Anaheim, Calif., this week. The 505 is the newest iteration of the company’s venerable 206 Jet Ranger, a longtime favorite in the light single-engine turbine class.

Bell stopped producing the 206 a few years ago, but with Robinson Helicopter’s successful R66 clearly indicating the presence of a robust market, Bell set about on an advanced development schedule to compete. The five-seater looks all new, but retains some familiar components, such as the rotor blades and drive system. The fuselage is more modern looking, and improvements have been made in cockpit comfort, including a flat floor and a huge door opening that makes it easy to get in and out.

Garmin is providing the G1000H for the panel, complete with the normal options, such as traffic and synthetic vision. 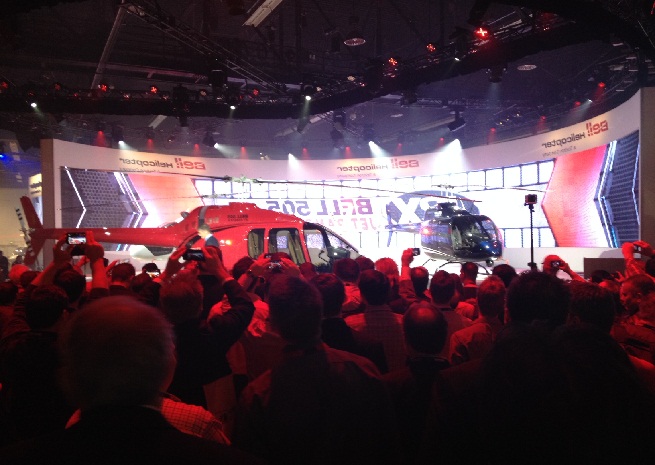 The helicopter is powered by Turbomeca’s Arrius 2R engine, a first-time collaboration for Bell. It includes dual electronic controls and a 3,000-hour overhaul interval. At takeoff it will pull a little more than 500 shaft horsepower, with 457 horsepower available continuously. That translates to 125 knots in cruise with a range of around 360 miles and a useful load of 1,500 pounds.

In developing the 505, the company reached out to a wide variety of customers and held intensive focus groups during the concept phase. According to Bell that makes the helicopter fit well in many different segments, including light utility, corporate, and flight training. One thing that came out early in the focus groups was extreme price sensitivity. Bell has chosen to attempt to make the helicopter have a wider appeal by selling more units at a lower price. A company representative said they worked hard with suppliers to get solid discounts that could eventually bring the helicopter to an asking price of right around $1 million. That makes it competitive with Robinson R66, and cheaper than others in the segment.

First flight is expected later this year and certification is hoped for between 18 and 24 months later.