The Park at Van Nuys Airport broke ground June 23 on a new facility dedicated to propeller aircraft, whose access to the California airport was once threatened by growing corporate use.

The $21 million, 30-acre propeller aircraft facility, located on a former Air National Guard site, will include a terminal, maintenance services, flight schools, a restaurant, a self-service fuel station, and an aircraft wash rack. AOPA has been working with other general aviation advocates to protect piston aircraft pilots’ access to the airport for more than a decade.

Key to efforts to keep pilots of small aircraft on the field was AOPA Airport Support volunteer Elliot Sanders, to whom AOPA awarded the Joseph Crotti Award in 2008. Sanders and fellow pilots recognized in the 1990s that the airport was moving to cater to turbine aircraft and would eventually push piston pilots out. He helped form the VNY Propeller Association and garnered support for dedicated space for piston aircraft.

AOPA threw its support behind the effort, meeting with area pilots and Los Angeles World Airports officials to underscore the importance of treating piston aircraft operators fairly with reasonable facilities as it updated its master plan. The plan focused on disposing of property for nonaviation, commercial development and accommodating large corporate aircraft, which would have come at the expense of space available to smaller GA aircraft. AOPA Vice President of Airports Bill Dunn emphasized to Los Angeles World Airports, the operator of Van Nuys and other area airports, that "piston aircraft should not be the sacrificial lamb of the airport's desire to dispose of airport property."

Plans for a “propeller park” began to move forward in the 2000s but were delayed after the economic downturn. On more than one occasion, Dunn met personally with the developer to encourage rapid development and to discuss challenges and ideas to move the lease forward within the Los Angeles World Airports organization. Sanders worked tirelessly behind the scenes with senior Los Angeles World Airports staff to navigate obstacles that arose during the process.

Dunn thanked Los Angeles World Airports officials for seeing the value and importance of the project and working through a number of challenges that came along as the project moved forward.

“This is a great day for light general aviation aircraft operators based at or wanting to relocate to VNY,” Dunn said. “This will be a first-class facility.”

According to a Los Angeles World Airports media release, the Park is expected to include a communal hangar for pre-1950 warbirds and consists of 30 acres dedicated solely to propeller aircraft. More than 300 piston aircraft are currently based at Van Nuys. 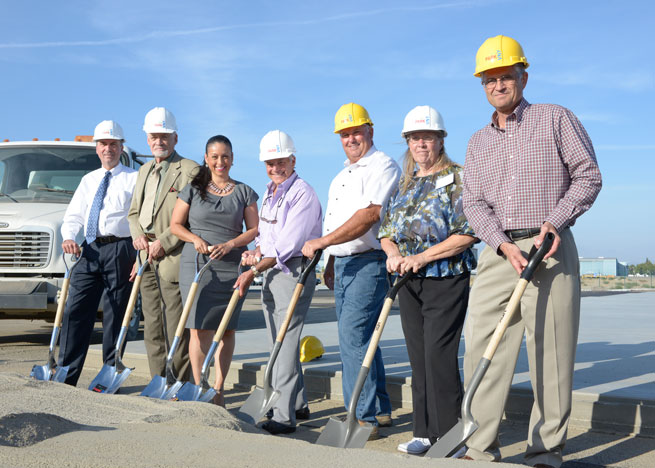