Get the app Get the app
Already a member? Please login below for an enhanced experience. Not a member? Join today
News & Media Big city seaplanes 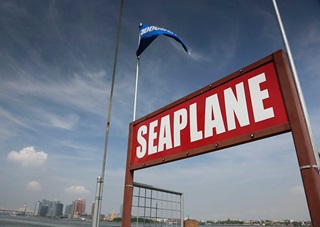 The traffic on FDR Drive snakes north along the eastern shore of Manhattan at a snail’s pace. It’s early on a Friday afternoon in August. It’s hot in the city. It’s sticky and loud, too. In a matter of hours the work week will wind down for many of this island’s workforce. But as Old Blue Eyes so famously crooned, this is the city that never sleeps. People, on the other hand, must grab a little down time now and then. For those who have the means, or the connections, an idyllic summer haven known as the Hamptons waits on the far end of Long Island. That sanctuary of green lawns and lapping waves offers a weekend respite from the noise and heat of the city. And best of all, it’s located just a hop, skip, and a jump away—allegedly.

In a concrete waiting room that is attached to a parking garage and adorned with unattractive blue corrugated steel sheathing, Chris Mitchell waits. Despite his decidedly shabby surroundings, he’s sharply dressed in bright red slacks, deep brown shoes, and a well-tailored gray sport coat. His fashion sense might be out of step with the crowd in Des Moines or Abilene, but he’s the height of fashion in New York. Mitchell is the publisher of GQ magazine. 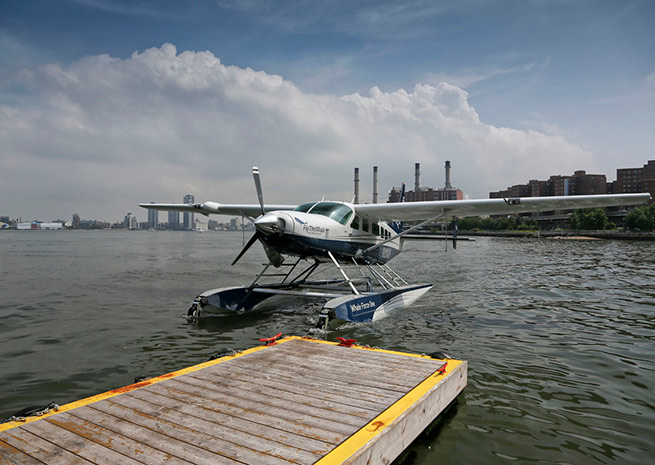 The youthful and patient Mitchell taps out messages on his iPhone while waiting for his flight to board. His reason for showing up at the seaplane base to wing his way out of town on a Cessna Caravan operated by a company with the unlikely name of “Fly the Whale” may be the most succinct rationale for availing themselves of the service that anyone has offered up. “It’s forty minutes [in the Caravan], as opposed to three hours in the car.”

Sold! Saving that much time adds four and a half hours to the weekend. The appeal of the 23rd Street seaplane base is obvious.

The official name of the facility is New York Skysports Inc. Seaplane Base, or as seaplane pilots know it, 6N7. Owned and operated by the New York City Bureau of Maritime and General Aviation, the base officially opened for business in December 1946. Its history goes back somewhat further, however. The New York Times maintains an article in its archives that details the seaplanes base’s birth as early as February 1936. It was then that the city’s illustrious mayor, Fiorello La Guardia, wrote to the New York Chamber of Commerce to announce preliminary work had begun on the base, which was originally little more than a ramp dedicated to the use of seaplanes. 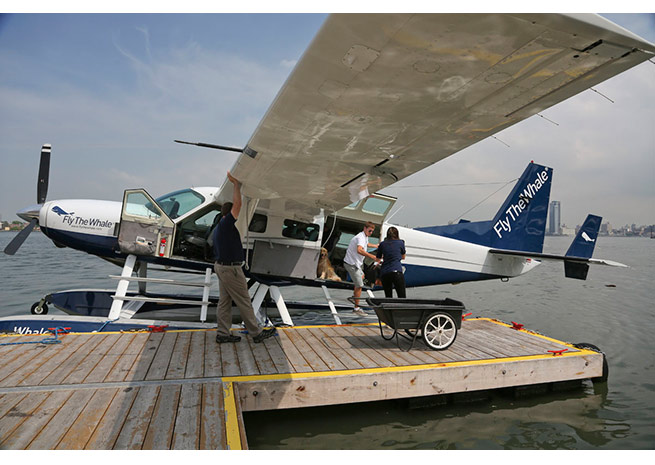 Sandwiched between the Williamsburg Bridge to the south and Roosevelt Island to the north, flying into and out of 6N7 is a feat worthy of a veteran bush pilot who maintains the crackerjack skills of a seasoned airline jock. To function here you have to be comfortable in densely populated airspace. John F. Kennedy International is only 10 nautical miles to the southeast, while Newark, Teterboro, and La Guardia airports all are closer still. And that considerable crush of traffic is just the airborne half of the equation.

The published landing lane at 6N7 is sizable at 10,000 feet by 1,000 feet. Yet the water’s surface is thick with tour boats, tugs, barges, water taxis, and kayakers—none of which seem to have any interest in giving way to seaplanes. To call the environment “challenging” is an understatement. Pilots are required to taxi at least 1,000 feet into the East River from the Manhattan side before initiating a takeoff run. All seaplanes are mandated to use three-blade props, and their pilots have to successfully complete a proving flight with an authorized member of the New England Seaplane Pilots Association before they can operate out of the seaplane base. And to top it all off, the current in the East River is moving at better than 2.5 miles per hour.

As John Kelly, owner of Shoreline Aviation, points out, “We’re [operating] in some of the busiest airspace in the world.” That challenge appeals to a certain type of pilot. With the insight of a man who has been doing this work for decades, Kelly adds dryly, “It’s a pretty demanding situation.”

For all its convenience and flair, 6N7 isn’t exactly well known, even among long-time Manhattanites. To combat the anonymity, Kelly provides instructions that are concise and accurate. “Tell your cab driver to get on East 23rd and keep going until you can’t go any further without getting wet.”

“It’s one of New York’s best kept secrets,” adds Kelly. He has been operating seaplanes out of the 23rd Street base since 1981, building up a clientele that is both appreciative and loyal. His business doesn’t limit itself to seaplanes entirely, however. Shoreline operates other aircraft as well, ranging from a Cessna 172 up to a Gulfstream III. “We operate five Caravan amphibians.” Kelly acknowledges. “That’s the bulk of the business.” 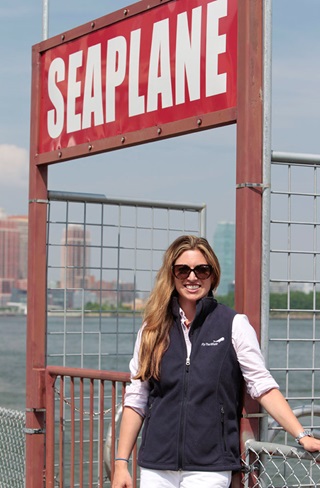 Sharing the same dock space with Kelly is a newer provider known as Fly the Whale. Mitchell is flying with them this afternoon. Like Shoreline, Fly the Whale also operates land airplanes for charter work that doesn’t involve water operations. Melissa Tomkiel and a partner began providing seaplane service from Manhattan in 2010. Their aircraft of choice also is a Cessna Caravan on amphibious floats.

“We were all frustrated with the commute from New York to the Hamptons,” says Tomkiel of the impulse that got her into the aviation business. Having the ability to take off from the East River and land on wheels at the destination became appealing. “East Hampton Airport is so convenient.”

That amphibious option makes the ground transportation portion of any flight more convenient for travelers and their hosts. The ability to land back in the city, even in inclement weather, transforms this mode of transportation from a mere pleasantry to a genuinely expedient and efficient service. While the preference is to fly off the water under VFR, the aircraft can transition to IFR if the conditions call for it. There are no instrument approaches to the river, however. Yet with multiple airports on terra firma, several nearby options exist.

“We shot several approaches yesterday,” says Kelly, who is justifiably proud of his company’s ability to serve its clients even in weather that wouldn’t normally allow seaplanes to operate. The flexibility to file and fly IFR allows the carriers to deliver their passengers directly into LaGuardia or Teterboro if the conditions close down the river to air traffic—although the convenience can go the other way, too. Kelly’s company recently picked up a family from LaGuardia and delivered them directly to the beach in front of their waterfront home on Martha’s Vineyard.

In direct contrast to the panache and adventure the seaplanes themselves can deliver, the seaplane base itself is dowdy. Chain link fence and razor wire surround the perimeter along the waterfront. The amenities of the waiting area in no way match the quality or the convenience of the service being offered. If anything it bears a striking resemblance to an underappreciated bus station or a medium-security prison.

The poor condition of the facility is something that both Kelly and Tomkiel acknowledge, but they remain hopeful and upbeat as they look to the future. The more use the seaplane base gets, the more incentive the city has to improve the facility. And use is on the upswing. Tomkiel reports that Fly the Whale is seeing an uptick in its business. “This year we’ve just about doubled our passenger count. Our flights have at least doubled.” 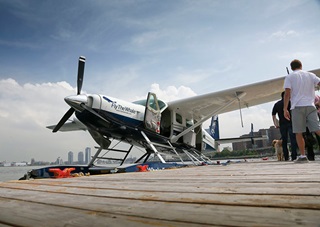 Kelly sees a bright future, too. Although after more than 30 years of providing service from the base on 23rd Street, he acknowledges, “It’s not the kind of thing that’s going to be a mass market [appeal].” With a seat to East Hampton costing $500 or more (bulk discounts are available from both companies), the average consumer is not likely to consider seaplane service to be favorably competitive in terms of price when compared to the traditional alternatives of buses, trains, and automobiles. But there are real advantages to traveling by air from Manhattan.

“The biggest attraction is the accessibility,” says Kelly. Whether you’re headed for a weekend in the Hamptons, a sales presentation in Boston, or a committee meeting in Washington, D.C., having the ability to get there quickly, and get directly back into midtown Manhattan, can make all the difference.

Tomkiel echoes that point. “Our most popular time is Monday morning at 7:15 a.m., to get back to Manhattan.” That flight allows businessmen and -women the option of spending the full weekend relaxing and luxuriating at the far reaches of Long Island, yet still get back to the office in time for the start of a new work week.

That logic works, as evidenced by GQ publisher Mitchell sauntering casually along the slender dock toward his waiting Caravan. The whine of a PT6 emanates from the river, winds around the building and mixes with the sounds of traffic until it is lost in the cacophony of the city. The Caravan taxis away from the dock, runs into the wind, and lifts off. Another satisfied customer has just gotten his money’s worth. As anyone who has ever flown as a pilot or a passenger in a seaplane knows, the vacation starts immediately.

Summer is short in the Northeast. Eventually winter will come, cold winds will blow, and ice may form in the river. That’s all right. Shoreline Aviation will relocate to Florida for the cold-weather months, running charters to the Bahamas—or whereever its passengers want to go. Fly the Whale will pull up stakes from the big city and move to the British Virgin Islands for the winter months. Their crews will keep flying, their amphibs will keep putting smiles on passengers’ faces, and New York can expect another round of weekend trips by air—as soon as the weather warms up and the vacation bug hits its inhabitants again.

Jamie Beckett is a freelance writer from Winter Haven, Florida. 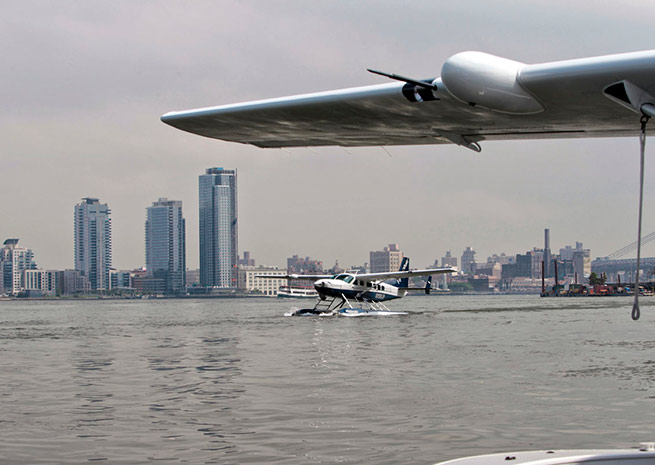