Get the app Get the app
AOPA will be closed July 4th, in observance of the Independence Day holiday. We will reopen at 8:30 am ET on Tuesday, July 5.
News & Media Small airport, huge losses 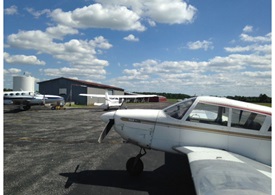 Aurora, Missouri, is a small town with a small airport, and by no measure is it a hotbed of crime. Four hangars flank a 3,000-foot runway, and there is no fence to discourage the curious from inquiring about a flight lesson at Aurora Aviation, or saying “hello” to a pilot.

“In the 21 years I’ve been here, we’ve never had any problem,” said Justin Richmond, who owns the FBO that offers training, maintenance, and fuel. Richmond said the discovery on the morning of July 10 that someone (or a team of burglars) had broken into as many as 20 of the two dozen based aircraft, most of them tucked into hangars, was the “first act of vandalism or theft other than somebody roughing up a Coke machine about 15 years ago.”

Police Chief Richard Witthuhn said he assigned two detectives from his department of 22 sworn officers to investigate, and evidence recovered has been sent to the state crime lab for analysis. Witthuhn also contacted the FBI for information and assistance.

Avionics were stolen from at least 16 aircraft. Richmond, who maintains most of them, spent considerable time compiling a list of exactly what is missing in the days that followed. In some cases, owners were out of state in the days following the unpleasant discovery; Richmond combed through logbooks for numbers and descriptions of devices stolen from panels while their owners slept. 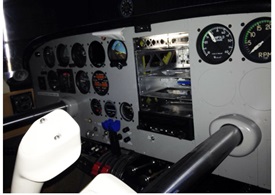 "The stuff was removed. It wasn’t torn out,” Richmond said, noting that the thieves ignored some items of greater value that were also present in the hangars. “They stuck to avionics. They were disciplined.”

The total value of the lost items is certainly in the tens of thousands, and probably into hundreds of thousands of dollars. Faith Collins, a Florida insurance adjustor and president of the Aviation Crime Prevention Institute, said that she could recall no recent crime approaching this scale, though it is not unheard-of for a handful of aircraft to be broken into at once.

“It was a significant event for sure,” Collins said, though she is unsure if Aurora has managed an unfortunate record. “I am wondering, are they targeting another airport somewhere?”

“We’ve had reports of avionics thefts before, but not to this magnitude at one airport,” Zecha said, calling the mass burglary a “very well-organized and planned theft. I’ve never heard of anything to this magnitude.”

While 2H2 has no fence, Zecha said that a fence would have been unlikely to have made a difference. While fences do a fine job of keeping the law-abiding at bay, the same is not true for burglars and thieves.

Eyes, on the other hand—including human eyes and cameras—are another matter. In 2010, Daniel J. Benny, security discipline chairman at Embry Riddle Aeronautical University, published a study of the AOPA Airport Watch Program, comparing crime data from 2002 and 2004 at Pennsylvania airports that adopted the program to those that did not. Those airports that adopted the program, which includes an online course for airport users and community members, signage, and other resources, reported a dramatic decrease in crime against both persons and property, including a reduction of property crimes reported at participating airports from 80 in 2002 to just three in 2004. (Crime rates reported at nonparticipating airports increased during this period.)

“The Airport Watch Program is proven to be effective,” Zecha said, echoing what Benny wrote in 2010.

Collins, whose organization is funded by industry organizations including insurance companies and the Aircraft Electronics Association, agreed with Zecha that a well-lit airport (particularly one equipped with motion-activated lighting) and a community trained to watch it are the strongest line of defense. Cameras, particularly used in conjunction with signs advertising their presence, act as a powerful deterrent, as well as document crimes.

Richmond noted that the maintenance hangar secured with dead bolt locks was not broken into, but hangars secured by hasp locks were. Zecha said stronger locks are generally more effective, particularly on the buildings in which aircraft are housed. Prop locks, throttle locks, and aircraft door locks are worth using, though they would not have been likely to deter the thief or thieves who hit Aurora.

The losses, including radios, GPS devices, and other panel-mounted instruments were all insured, so the insurance companies involved will bear the brunt of the cost, though it will take time to restore so many panels. Richmond's first order of business was to supply detectives with as complete a list as possible of what was stolen, including identification numbers that might help catch the thieves.

The primary function of ACPI, founded by the late Bob Collins (who was not a relative of the organization’s current president, though a longtime friend and colleague), is to maintain a database of stolen aircraft and components, making that information available to avionics installers and shops around the country through AEA, which also alerted members. The data is also entered into the national crime computer network available to law enforcement officials across the country, increasing the chance that a stolen device will be identified when it returns to the market.

“The database does help,” Collins said, though she did not have specific details to offer on how many arrests and prosecutions have resulted from its use.

Collins said that aircraft owners often do not document serial numbers or other pertinent information about installed equipment, and even the aircraft itself. That can complicate both the recovery of stolen property (which becomes property of the insurance company once a loss is paid), and the prosecution of those responsible. Savvy thieves may also attempt to alter or remove serial numbers, something that consumers should watch for when buying used devices—particularly from sellers with whom the buyer is not familiar, sellers who offer cheap deals online, or otherwise outside of an established shop.

Collins said she is working with contacts and colleagues to make sure the word is out at EAA AirVenture in Oshkosh, Wisconsin, the next major U.S. aviation event and the largest of the year, for security staff and others to be watchful for suspicious sales and merchandise. She said consumers should be particularly wary if a device has no data plate, or if the data plate shows any signs of being altered.

“Don’t buy it,” Collins said. “If somebody’s got a whole slew of them, then that might be something to alert the authorities about.”