Get the app Get the app
Already a member? Please login below for an enhanced experience. Not a member? Join today
News & Media Life-changing flights 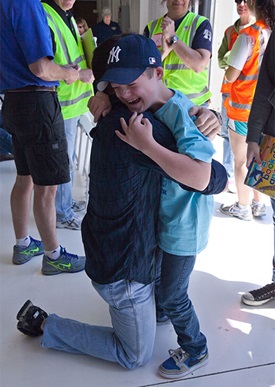 Pilots don’t need to be told that first flights change lives, though the impact can be even more profound for some. More than 20 years after Rick Amber overcame injuries suffered as a U.S. Navy pilot that left him paralyzed and returned to the cockpit on a mission to share the joy of flight with children facing their own challenges, the organization that he created continues that mission, to profound effect.

Consider this report from Maureen Brice Bordelon, the parent of a 13-year-old boy with special needs who is among hundreds flown by volunteer pilots working through Challenge Air, the Texas nonprofit organization Amber launched in 1993.

“My husband’s face was beaming as bright as my son’s, and he told me that Jonathan did great and loved seeing the view of North Texas that had circled around,” Bordelon wrote to the organization following a Fly Day event. “When I asked Jonathan what he liked best about being a co-pilot, he looked at me smiling and said, ‘Airplane,’ hugged me tight and added, ‘Hope.’”

There is no way to calculate the impact of such flights in human terms. Challenge Air Executive Director April Culver can, however, count the flights: more than 800 since 2013, a significant achievement in itself given that the economic downturn forced the organization to lay off virtually the entire staff about three years ago. 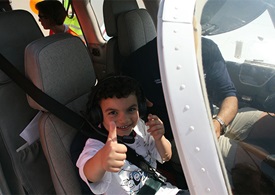 “We’re doing much better financially,” Culver reported in a recent telephone interview, noting that she has been able to advertise for a program assistant to refill one of those lost positions. Culver and her dedicated volunteers plan to increase the pace, from eight Fly Day events per year up to 12 by 2015—a plan made possible in part by a $10,000 grant from the AOPA Foundation’s Giving Back program. Grants are funded entirely with tax-deductible donations to the AOPA Foundation; those donations, which do not include any AOPA membership dues, supported 10 charitable organizations with various missions including public benefit flying and flight training in the inaugural round of grants. The program has created positive publicity for GA in media outlets around the country.

Culver said the Giving Back grant helped Challenge Air cover costs such as T-shirts that are given to each participant, along with a set of pilot’s wings. She noted that AOPA pilots have been enthusiastic volunteers, donating their time, skills, and fuel to make the missions possible.

“The day was perfect and beyond any expectations I had,” Bordelon wrote. “Challenge Air, the volunteers and generous donations made it possible for our little guy and many other children reach for the sky and, in Jonathan’s words, hope.”