Get the app Get the app
Already a member? Please login below for an enhanced experience. Not a member? Join today
News & Media Wingsuit pilots race

They jumped in groups of four from 8,000 feet, and twisted and turned past a series of aerial gates suspended between helicopters. A field of 52 wingsuit pilots raced through the skies over Northern California July 17, and American Andy Farrington, 31, posted the fastest time in the first-of-its-kind competition organized by Austrian energy drink (and action sports) giant Red Bull.

“You’re racing the people right next to you,” said Farrington, in an article published online by Red Bull. “It’s cut-and-dry—you either made the gate or you didn’t. You either finished ahead of the other guy or you didn’t. And you’re doing it all thousands of feet in the air.”

Red Bull Air Force pilot Luke Aikins came up with the idea, and said in another Red Bull article that safety was a priority. 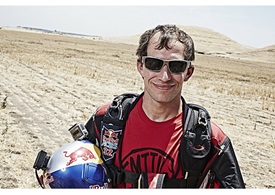 “The biggest challenge was coming up with the safest possible way to have a true competition, one where at the end of the day I can say: This is the best wingsuit pilot,” Aikins said. Each pilot wore a GPS sytem that tracked speed, position, and time on course. “Starting after the second round, people were truly racing. You’re seeing angles. They’re not just flying wingsuits; they are legitimately racing head-to-head for the next gate.”

Wingsuit pilots have been taking their passion to new heights in recent years; Brian Drake, an American living in Europe to devote his time to wingsuit flying and filming, told AOPA in March he hopes it will be considered “less of a stunt, and more of a sport.” Aikins hopes racing will be part of that.

“I hope we prove a concept here,” Aikins told his Red Bull colleagues. “We do have athletes with the skill, and the technology and knowledge is there to take this event to the next level.”