Historic pilot report made on way to Oshkosh 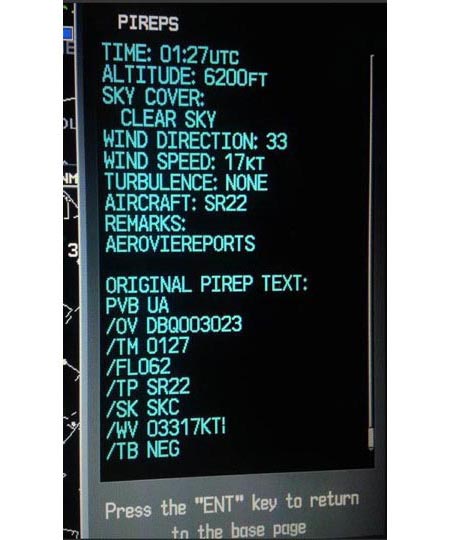 Not too many days later, the now-Internet based Aerovie reporting system will offer the same capability, transmitting through an inexpensive DeLorme inReach 2-Way Satellite Communicator or the Spidertracks tracking system, both using the Iridium satellite network.

If you are thinking you don't have time to send messages in flight, letter by letter such as an email might require, not to worry. The Honeywell system is menu based, meaning you can scroll to "turbulence," and then scroll to a word describing whatever level of turbulence you are experiencing, and hit "send." That's all there is to it. The type of aircraft, altitude, and location are reported automatically.

The in-flight pilot report (pirep) is just one of several new tricks Lockheed Martin is developing. There are 20 to 30 more items to come that will allow you to easily communicate with flight service without worrying about radio reception and frequency congestion. They are as yet unannounced. You may, for example, be able to update your visual flight rules flight plan electronically, changing the expected time of arrival.

Also to come is an announcement by BendixKing by Honeywell that it is working on including electronic in-flight pireps in its products. Several other unnamed companies are also considering the capability. One of those is most certainly Garmin, while ForeFlight is known to keep close ties on all the Lockheed Martin improvements in flight services. In the future there are plans to query aircraft in areas of difficult weather for pilot reports.

Lockheed Martin plans briefings during EAA AirVenture 2014 on Wednesday, July 30, at 10 a.m. Central Daylight Time at the FAA Safety Center and 1:30 p.m. at the seaplane base.