Get the app Get the app
Already a member? Please login below for an enhanced experience. Not a member? Join today
News & Media Pelton hits FAA delays on third class medical

Experimental Aircraft Association Chairman Jack Pelton called FAA delays on third class medical reform “deeply frustrating” and said at a press conference July 28 that the aviation industry may have to pursue a “legislative solution” if the stalling continues.

“We had been told for quite some time that there would be an (FAA) proposal no later than May,” Pelton said. “We have seen nothing. There’s great intent—but nothing has happened.” 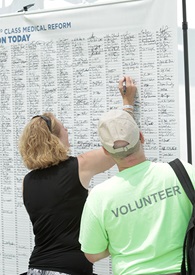 FAA Administrator Michael Huerta was scheduled to appear at EAA AirVenture later in the week, and Pelton encouraged pilots to bring up their concerns with the agency leader.

Huerta recently told AOPA that a formal proposal, known as a notice of proposed rulemaking (NPRM) for new medical standards is imminent. But Pelton said he is losing patience with what already has been a drawn out, multi-year process.

Pelton also said the aviation need tort reform to prevent “frivolous” lawsuits that drive up manufacturing costs and consumer prices. And he said a recent move by the FAA to delay a streamlined aircraft certification process until 2017 at the earliest is harmful.

“It shows the chasm between what the industry needs and what the regulatory agencies are willing to do on a timeline that supports the free market.”