Get the app Get the app
AOPA Members DO more LEARN more SAVE more - Get MORE out of being a pilot - CLICK HERE
News & Media Financing, insurance options offered for ‘Reimagined Aircraft’

As part of AOPA’s “Reimagined Aircraft” effort to open the door to flying and aircraft ownership for more people by refurbishing older aircraft and putting them in a flying club or partnership, the association is offering financing and insurance options.

During a seminar about the program July 29 at EAA AirVenture, AOPA President Mark Baker, Aviat Aircraft President Stu Horn, and AOPA staff detailed the program and refurbishment process. About 10 Cessna 152s and one Cessna 150 will be refurbished by Aviat as part of AOPA’s experiment. AOPA chose the Cessna 150/152 because they have a proven track record and are available in abundant supply—there are more than 13,000 on the FAA’s registry. AOPA’s hope is that the model would be replicated by others, whether by refurbishing more Cessna 150/152 or expanding to other aircraft.

The AOPA Aviation Financing Co. has worked with a couple of lenders to offer options to flying clubs, partnerships, and individuals to offer a low monthly payment for a Reimagined Cessna 150 or 152 priced at $89,900 and $99,900, respectively. New trainers aren’t available for less than a quarter million dollars, making these like-new Cessnas appealing to many looking to start up a flying club or partnership.

AOPA Insurance Services is able to offer $1 million liability/$100,000 per passenger, hull coverage for $99,900, medical pay of $5,000 per person to flying clubs and partnerships. Students are included in the flying clubs and partnerships insurance. The estimated annual premium for flying clubs would range from $1,400 per year to $4,100, and range from $1,000 to $1,500 for partnerships, depending on the number of people in the partnership. AOPA Insurance Services is also able to offer an annual premium to flight schools for $6,000 to $7,000 a year, which is the same as schools currently pay.

“You can fly. You can fly for a lot less than you think,” AOPA President Mark Baker said.

Aviat Aircraft President Stu Horn explained the refurbishment process of the 152Reimagined on display at AOPA’s tent at EAA AirVenture, a process that will be replicated on all of the Reimagined 150/152s ordered through Aviat.

Horn said his company identifies suitable Cessna 150/152s and performs a pre-buy inspection—the aircraft must be airworthy, he stressed. Once an aircraft is at Aviat’s factory in Afton, Wyoming, it is “completely disassembled to its bare bones.” The paint and primer are removed, and inspections are performed on all of the part assemblies and components. Then, the company decides what to replace with new, overhauled, refurbished, or rejuvenated parts. All of the wiring, hoses, circuit breakers, and engine accessories are new, he said. The current 152Reimagined has an overhauled propeller, instruments, and engine.

These aircraft, Horn said, are “as new as can be.” 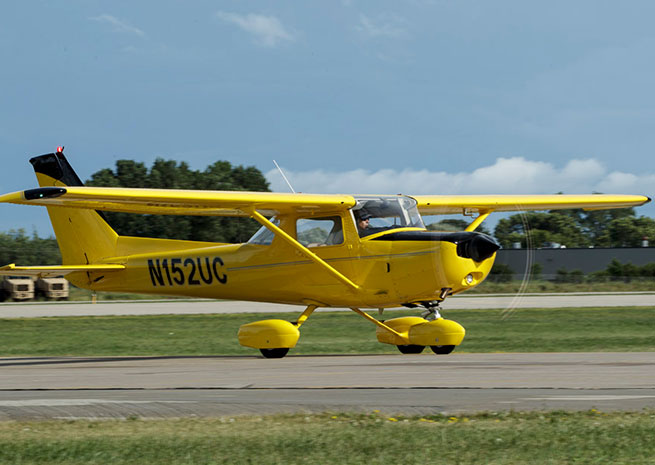