Get the app Get the app
AOPA will be closing at 2 pm ET on Friday, July 1, in observance of the Independence Day holiday. We will reopen at 8:30 am ET on Tuesday, July 5.
News & Media Get some smash on

Get some smash on

“Lower your nose,” advised the retired U.S. Air Force F-16 pilot sitting in the right seat. Even in a shallow dive, the SIAI-Marchetti SF.260 picks up speed quickly, losing little altitude to gain extra knots from the slippery speedster. “See? We want to get as much smash as we can on this for our fights.” 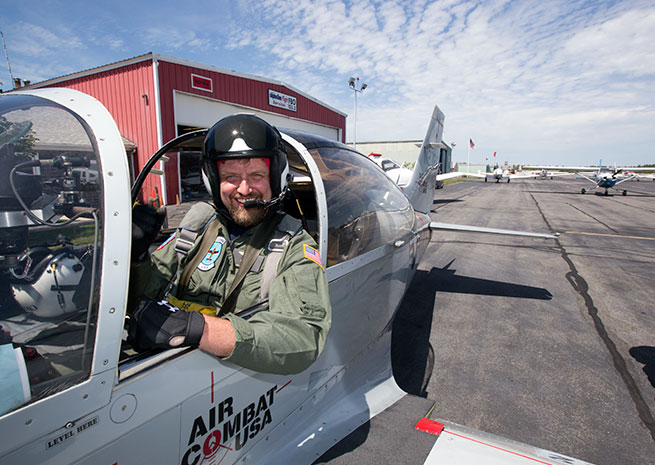 Smash is a good word for it. Creating and managing energy—a combination of airspeed (kinetic energy) and altitude (potential energy)—has been the key to surviving dogfights since the first engagements. (Along with keeping eyeballs on whomever is trying to shoot you.) For a general aviation pilot, even for one familiar with other aerobatic disciplines, this is a new kind of flying. Being aggressive, yet smooth, is a difficult balance to find. Manor, who retired as a lieutenant colonel and is now among the highly trained tacticians flying for Air Combat USA, was all of that—and the nicest guy you’d never want to meet on the other side of an air-to-air engagement.

To the delight of an AOPA writer flying combat on vacation (on the writer’s own dime) at Plymouth Municipal Airport in Plymouth, Mass., Manor also had something in common with cats who like to toy with their prey a bit. Turns out, that part really is fun.

‘A hobby that got out of hand’

Mike Blackstone founded Air Combat USA in 1988, and quickly found an eager customer base, both pilots and nonpilots looking for a taste of what fighter pilots do for a living. Blackstone patented a laser gun/receiver system (originally intended, he said, as an anticollision aid) and mounted it on the SF.260, along with cameras to record the action for posterity. The civilian dogfighting industry was thus born, and while operators have come and gone, Blackstone’s has set the pace, with more than 45,000 sorties flown, a stable of retired fighter pilots, and a fleet of eight Marchetti SF.260s that crisscross the country on tour. (The company also operates an Extra 300 out of its California base, used primarily for aerobatic experiences and training.)

“It’s just a hobby that got out of hand,” Blackstone said in a telephone interview.

Blackstone and his staff work to give the experience lots of fighter pilot flavor: Customers are issued "mission orders," flight suits and helmets are provided, and each participant gets to choose a call sign. Without guidance, one tends to gravitate toward macho-sounding options such as "Wolf" or "Viper." It works a little differently for real fighter pilots, who are often given a call sign that reminds them to have a little humility, one based on a foible or mistake made during training—and a lesson learned that is worth remembering. The writer's first choice, made in haste before consulting actual fighter pilots, was not destined to stick.

Blackstone said that while previous aviation experience is not required (his fighter pilots will do as much coaching as needed), GA pilots can gain much from the air combat experience (in addition to potential bragging rights).

“You learn to let the plane talk to you while you’re in these unusual attitudes,” Blackstone said. “Let the pixies dance on the wings, not elephants ... you start to finesse the airplane.”

Combat also forces a pilot to break any habit of fixating inside the cockpit: Keeping the enemy in sight at all times is absolutely essential, and requires some flexibility. Blackstone said pushing pilots (and nonpilots) out of their comfort zone is part of the fun.

“You can win the dogfight with two fingers,” Blackstone said. “No sense in throwing an aileron out there for no particular reason.”

'You’re killing yourself on that buffet'

Mark Tschirch, a fellow AOPA member, was the other paying customer in this fight, and he was having the same trouble keeping the Marchetti turning at its maximum rate. A pilot for 30 years, Tschirch came into the fight with aerobatic experience, but fighting in a Marchetti is not at all the same thing as looping a Citabria. There is a very fine line between maximum turn (and maximum G-load), and the buffet that warns that the heavily loaded wing has begun to stall. Buffeting depletes energy, and Tschirch had lost position. He was inexorably being drawn into the pipper at the center of his pursuer’s gun sight. Had there been actual bullets involved, he would have been in very real trouble, but Air Combat USA prides itself on safety, from the detailed briefing and rules of engagement that include a minimum of 500 feet of separation, and 3,000 feet agl at all times. Protecting egos is another matter. 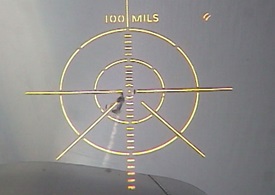 “Now, let's don't be greedy, here,” Manor said. “Let's let this go a little more and have some fun … you learn a little more.”

Tschirch, flying with Jim “JR” Reed, another accomplished fighter pilot who flew the F-4 and F-15 for the U.S. Air Force, was in a tough spot, inside the “control position” of his pursuer, and already out of options. He tried reversing his turn to the right in a left-circle fight, which did not help his situation.

“Now, he’s going to turn, going to try to spit us out,” Manor coached. “Now you’ve got all the speed you want. Go up and shoot him.”

About a minute after this second fight began, it ended: Writer, 2; Citabria pilot, 0. Manor announced he would keep his thoughts to himself on the next engagement.

“He’ll probably swack you because (Reed is) helping, but you’re going to learn a lot,” Manor said brightly. Indeed, two crucial mistakes on the writer's part put Tschirch on the board: failure to gain any real “smash” on the turn-in and approach (120 knots is far too slow), and failure to stay out of that buffet. 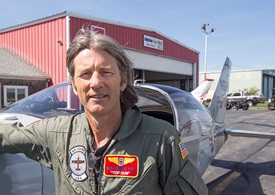 The fourth engagement was similar, both “guest pilots” pulling with gusto, and paying for it in buffet and lost energy. Despite gaining position, the writer dropped just below the 3,000-foot hard deck and automatically lost the fight, pulling Tschirch even at 2-2 with one engagement left.

It was cool, and several lessons had been learned in time for the tiebreaker.

Turning into the final engagement, nose low, building speed quickly, Tschirch was in for his biggest challenge yet. The writer felt confident and comfortable, ready to find that sweet spot in the pull, and Reed announced over the radio Tschirch would be on his own. 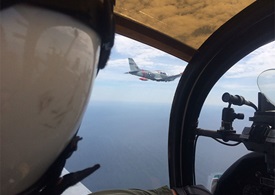 Smooth pull to the vertical for a high yo-yo—check.

Tally on the bandit, turning left.

Back in the buffet. Easing the stick just a little. Tschirch was also in the buffet, and falling toward the hard deck, running out of room to maneuver.

Fifty seconds in, and the writer pulled up just in time, bandit now out in front, about 300 feet lower.

“We’re on the deck, now we’re in control position,” Manor said. “The fight’s over.”

Less than a minute later, a squeeze of the trigger brought a satisfying squeal from the targeting system, and the bandit’s smoke generator kicked on.

With a 3-2 victory for the day, and a near certainty there will be another mission in the future, a new call sign suddenly seemed appropriate: “Buffet.” Manor approved.

Fighter pilot for a day

At least three operators around the country currently offer civilians a chance to experience air combat, as well as aerobatics.

Air Combat USA is based in Fullerton, Calif., with tour stops offered in 30 locations nationwide in 2014. Rates start at $1,395 for a two- to three-hour mission with five to six dogfights; the author bought the $2,095 Fighter Lead In program, which included two missions in one day, five scripted engagements, and five unscripted dogfights. After flying two missions, Air Combat USA offers customers a reduced rate of $700.

Sky Combat Ace, based in Las Vegas (and featured in the January 2012 issue of AOPA Pilot), operates an Extra 300L and a classic Waco YMF-5C open-cockpit biplane.