Get the app Get the app
News & Media Cutting shirttails, passing it on

Cutting shirttails, passing it on

Zac Davis’ tattered shirttail June 13 marked a milestone for the student pilot as well as for the program that helped him reach it.

Davis, a student in the Montoursville, Pa., after-school aviation program, soloed three aircraft on his sixteenth birthday. There to supervise the flights was his instructor, the first student to solo under the grant-funded program that began as a middle school technology class and grew to offer ground school and flight training to high school students.

Ground instructor Harry Boyer said he introduced aviation education into the Montoursville Area School District’s curriculum in 1995. Later, with the addition of a Piper Tomahawk, reconstructed from two donated aircraft that had been damaged, students could climb into a real airplane to fly a PC-based simulator. The Tomahawk, with its tail nearly touching the ceiling, brought a taste of flying into the classroom but left middle school students hungry for more.

The program expanded to offer a ground-school-style class for tenth through twelfth grade. Students must wait until tenth grade so they’re closer to the age requirement of 16 for soloing, Boyer said, and they can take the class all three years, from basic to advanced. Grants from the International Society of Transport Aircraft Trading (ISTAT) Foundation enable students to get up to three hours of flight instruction if they choose. 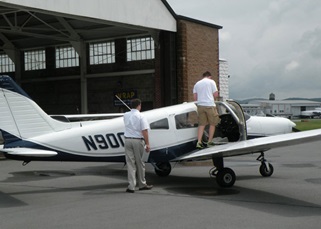 Boyer was at Williamsport Regional Airport to see Davis’ rite of passage after flying a Cessna 172, Piper Warrior, and Cessna 162.

It takes a village

Davis said he first became interested in aviation in a sixth grade class with Boyer. He got an introductory lesson for Christmas in seventh grade, he said, and started training at Wilkes-Barre Wyoming Valley Airport more than an hour away. He didn’t realize that the airport right down the road offered flight training, too.

Boyer told Davis and his mother about Alex Minium, a CFI at Williamsport Regional Airport who had gone through the same program. Boyer had also helped Minium find an instructor, recommending his own CFI, Tony Sutsko.

Minium, now 25, soloed with help from the program’s grant and went on to earn his private pilot certificate in high school and study aeronautics at LeTourneau University. He returned to the Montoursville area and now flies as a charter pilot and instructs for Energy Aviation. Boyer said Minium and Davis are the only students to solo through the program, although many others have taken the grant-funded introductory lessons and several have gone on to careers in aviation such as military pilots or line chiefs. 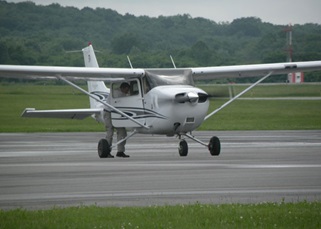 Minium began flying with Davis early in the mornings. Since the two live near one another, Minium said he would pick up Davis at 6 or 6:30 a.m. and fly with him before school; he would drop him off at the high school, just down the street from the airport, after the lesson.

Minium said he tries to work with the Montoursville class as much as possible because he had gone through it himself. According to Boyer, the program has enjoyed support from the general aviation community, including Energy Aviation, the Williamsport Regional Association of Pilots, and other groups. “It takes an entire ‘village’ to support an active environment of flight education possibilities,” he said in an email.

Not only has the program allowed students to pursue their dreams, but it’s also opened possibilities for the teacher. A nonpilot who had always dreamed of flying, Boyer earned his private pilot certificate and ground instructor certificate as part of the program; he said he started training at age 50 and wants to give kids the opportunity he never had at that age.

Boyer retired as a Montoursville Area School District teacher but continues to teach the after-school class as he transitions responsibility to his replacement, Chris Liddic, who is progressing through pilot training now. He said the program, entirely supported by outside financing, will continue as long as it can secure funding. 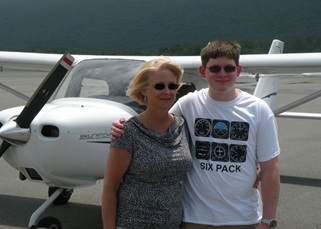 Early in the morning of his solo, Davis and Minium flew IFR to Harrisburg to get Davis’ student pilot certificate just as the flight standard district office opened. Davis got to log some dual time in actual instrument conditions, flying two approaches on the trip, Minium said; while waiting for the opportunity to solo, they had had an opportunity to do instrument work.

“Because we had been flying for so long, had he been old enough I would have gladly soloed him a long time ago,” Minium said.

They arrived back at Williamsport Regional and waited for the ceilings to lift. Family members, including some who had traveled from Florida, came out to see the accomplishment, as well as several members of the airport community. In the tower was Sutsko, the tower manager, who had taught both Davis’ ground instructor and CFI to fly. Boyer described it as a “third generation view of flight instruction.”

Davis said he was scared at first, “and then once I did the first takeoff and touch-and-go, the nerves were gone, and then I was fine.” If he was nervous, he didn’t show it; “Zac wasn’t the least bit anxious at all,” Minium said.

The following week, Davis was planning to fly his solo-cross country June 20. He has taken a summer job at Energy Aviation and said he wants to become a flight instructor. Beyond that, he said, he’s not sure exactly what he wants to do. He may want to fly as a charter pilot, but always wants to keep flight instructing. He likes to teach. 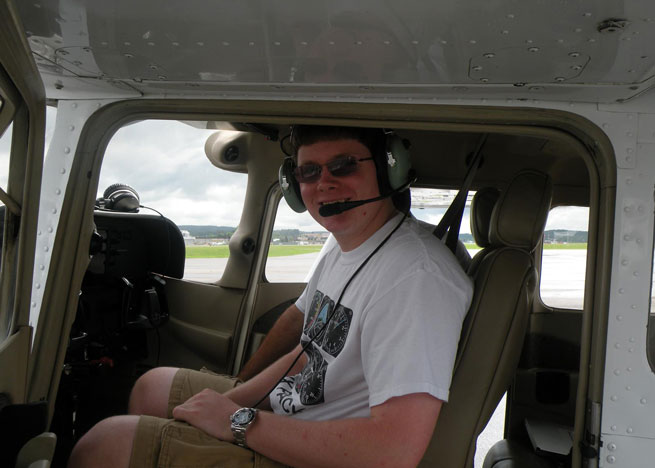 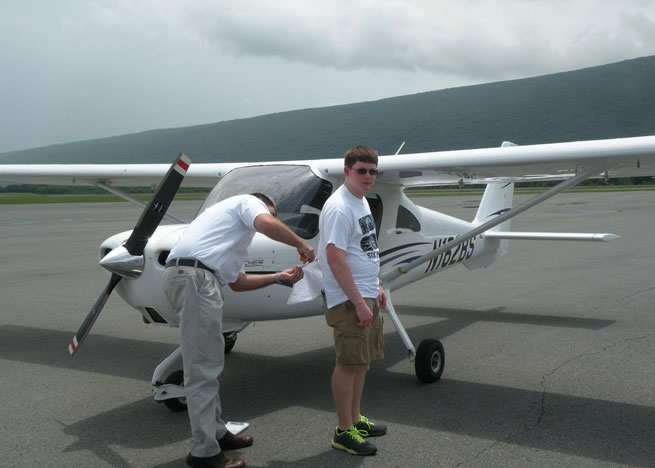