You can just about set your watch by the sound of round motors firing to life on weekend mornings at Plymouth Municipal Airport (PYM). Bob Trinque loads a hungry crew into his vintage C-45H—a Beechcraft Model 18 built for the U.S. Air Force—just  about every Friday, Saturday, and Sunday, a routine he has kept in all but the worst weather for the past 24 years, flying friends old and new to nearby airports for breakfast.

Pilots arriving at the AOPA Fly-In July 12 should keep an eye out for Trinque and his fellow Chow Hounds—they usually depart at 8 a.m., and return around 11 a.m. The blue-and-gold twin will be easy to spot, and the tradition has made Trinque a local celebrity, his military Beech 18 a sought-after ride. 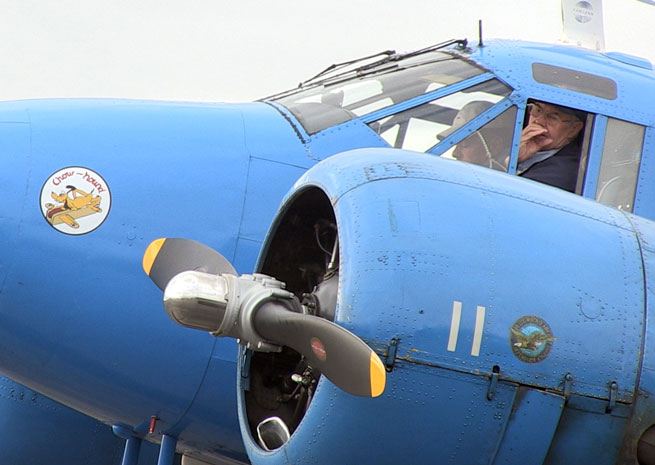 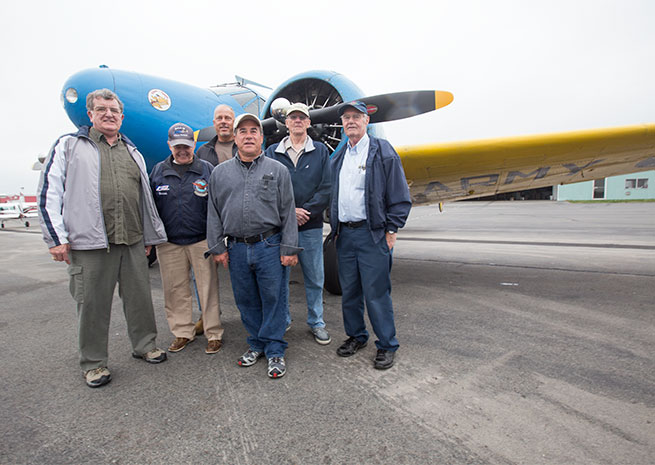 Trinque, a retired Delta Air Lines captain and recipient of the FAA Wright Brothers Master Pilot Award, is soft-spoken about his persistent pursuit of bacon and eggs, though he was pleased to report that his own love of aviation has proved infectious. Christopher Hyldburg, who founded Alpha One Flight Services two years before Trinque began making his rarely broken streak of weekend chow runs, said he and his instructors have trained more than a few students who got their first taste of aviation riding with Trinque to Martha’s Vineyard, Cape Cod, and other destinations in the area. Hyldburg has made it a point to thank Trinque for the extra business.

“The flight schools really like it,” Trinque said with a smile, standing in front of his Air Force transport painted in Army Air Corps blue and gold (circa 1941), with nose art perfectly suited to the mission: A cartoon image of Disney’s Pluto riding a hot dog with wings, a “Chow Hound” painted in tribute to a World War II B-17 that carried the same decoration. 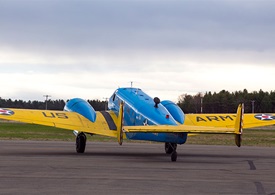 Trinque said he’d likely leave the Chow Hound on the ramp for a few hours after returning on July 12, and give AOPA Fly-In attendees a chance to look it over. Getting a ride would be another matter—Trinque has a long list of regulars and friends who line up well in advance for one of the coveted seats.

“We chip in for gas and food. That’s how we do this,” said Trinque, who is also an airframe-and-powerplant mechanic and handles all but the most major maintenance on his own. “It’s been a lot of fun over the years. I never thought I’d be doing it this long.” 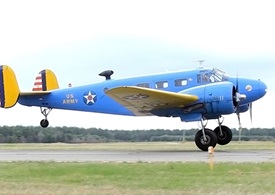 Some of Trinque’s regulars have logged more than 700 round trips; all are friends, or quickly become friends with the personable pilot who welcomed AOPA to his hangar—conveniently located near the airport’s fuel supply. The Chow Hound burns about 50 gallons of fuel per hour (a little less on long-distance trips), and Trinque adds a gallon of oil to each engine every weekend. He borrows propellers from a friend when his own come due for overhaul, a process that usually requires five or six weeks.

“I don’t like to down the airplane that long,” Trinque explained. “If it’s down more than two weeks, I have to fix oil leaks. It’s one of those things.”

Trinque said he has given some thought to a cockpit upgrade—he frequently flies IFR, though he does not have an IFR GPS just yet. The Chow Hound does have loran in the panel, but with that system no longer operational, “I don’t turn that on anymore.”

He has, at times, thought about selling the Chow Hound and wrapping up his fly-out run, but such talk draws instant protest from his regulars, and Trinque relents.

“People just admire him for what he’s been able to do all his life. His record is unbelievable,” said Warren Eklund, who landed a slot with the regular Friday group 17 years ago, and has since flown with Trinque for more than 600 hours. “He’s just a remarkable pilot.”

Eklund said “it’s been a joy” to be a part of the Chow Hound crew for 17 years and counting. “It’s great to be in the right seat.”

Landing that coveted seat is literally the luck of the draw. Trinque holds out a hand of five cards before each flight, and passengers who draw one of the two aces get to ride in the right seat—one out, one back.

“We all just hope for that ace, because it’s a fantastic experience being in the copilot seat,” said Eklund, who has had a chance to try his own hand at the controls under Trinque’s expert guidance.

On Mondays, Trinque makes occasional visits to the New England Air Museum adjacent to Bradley International Airport (BDL) in Windsor Locks, Conn., equipped with a display sign explaining some of the aircraft’s details and history. He used to fly a Monday breakfast run, but cut that back a bit to keep the mission a little more manageable. He said his many friends at the airport surprised him with a nomination for the Master Pilot Award.

“I hate to admit it, but one of the requirements is you’ve got to be flying 50 years continuously,” Trinque said. “I hate to say that, but … 50 years.”

He paused, and continued reflecting on his impressive aviation career:

“But I’m still at it, still going strong,” Trinque said. “It’s been great, it really has.”