Get the app Get the app
AOPA Members DO more LEARN more SAVE more - Get MORE out of being a pilot - CLICK HERE
News & Media Airshow pilot, wing walker seek to inspire women

Women of Aviation Worldwide Week kicks off at AOPA headquarters

Woman to woman, what’s it take to break into the aviation industry, either for a career or a hobby? Have a dream. Get an education. Be disciplined and persevere. It’s never too late. That’s the advice airshow performer Jacquie Warda, Flying Circus wing walker Jana Leigh McWhorter, and The Ninety-Nines member Carol Andrews offered for girls and women of all ages.

The three women traveled to AOPA headquarters in Frederick, Md., March 3 to help kick off Women of Aviation Worldwide Week. Warda and McWhorter participated in a panel discussion centered on the week’s theme: 100 years of female aerobatic pilots and 50 years of women flying solo around the world. The group, originally scheduled to host girls at the College Park Airport in College Park, Md., moved the event to the association’s AOPA Live studios to broadcast the discussion online after heavy snows in the area canceled many activities. AOPA is a sponsor of the event, which runs March 3 through 9.

“AOPA is proud to be a part of this worldwide celebration to introduce women of all ages to the amazing world of aviation and welcome them into our community,” said Brittney Miculka, AOPA senior manager of pilot community development. “All week long, AOPA will be giving first flights to girls and women in hopes of motivating and challenging them to pursue aviation as a career or hobby.”

Warda, known by her call sign, “Jacquie B,” grew up around aviation—her father is a pilot and worked for McDonnell Douglas—but didn’t learn to fly until she was 32. Soon after, she fell in love with aerobatics and then started performing in airshows in 2003 at the age of 50. She also has competed in the Reno Air Races in her Pitts.

“I guess I was meant to be in aviation, in my mind anyway,” Warda said. While her father is no longer an active pilot, Warda said he does fly with her, minus the aerobatics. “He wouldn’t have any of that.”

Warda encouraged young girls to dream big and to get an education to make those dreams a reality. She also cautioned girls not to let others tell them some fields are for men only. “I don’t believe that exists anymore in this day and age,” she said, noting that women can be mechanics, fighter pilots, or anything else in the aviation field.

Andrews’ involvement in aviation also started with a family connection, her husband. Andrews admits that she was afraid of flying but would hop in the airplane with her husband because she didn’t want to stay at home. She started learning to fly 25 years ago when her husband lost his medical certificate. She wanted to learn to fly so that he could still go up in the air, but after a few lessons decided she would “do it for me now.” Her husband died five years later, but she has kept their Grumman Tiger and continues to fly. “Flying has become a therapy,” said Andrews, now in her 70s. “He’s on my shoulder.” She’s also a member of the Northern California Ninety-Nines Sutter Buttes chapter, which she said, “became my support team” after her husband died.

Andrews also encouraged young people to get involved in aviation, saying, “We’re aging out,” but stressed the aviation community need to come alongside them to offer mentoring and financial support.

Wing walker McWhorter came into aviation by chance. She watched the Flying Circus at Bealeton, Va., and was mesmerized by a father/son wing walking act. “My first thought was, ‘How is that legal?” said said. “You can do that? I wonder if they are looking [for another wing walker].” McWhorter auditioned and has been wing walking with the Flying Circus for 10 years. “I love the freedom I feel, especially when I’m on the top wing,” she said. “I feel like a bird.”

McWhorter encouraged those seeking careers in the aviation field to persevere through road blocks. “You have to be strong, confident,” she said. But bottom line, go for it. “If you have dream…pursue it.”

Women of Aviation Worldwide Week, launched in 2011 by Mireille Goyer, has grown from “Fly It Forward” events throughout the world to a weeklong initiative with speakers and activities.

This year, speakers will participate in live online discussions, on March 3, 5, and 8, and recordings will be available afterward.

The real appeal of the week, however, is the flying. Airports, flight schools, and pilots will be giving girls and women a taste of aviation with introductory flights throughout the week through “Fly It Forward” events.

Victoria Neuville Zajko, Women of Aviation Worldwide Week U.S. team leader and organizer of the Frederick, Md., “Fly It Forward” event, said that participants across the globe flew more than 5,000 women. Neuville said that of those who participate in an event, 77 percent surveyed said they would pursue aviation as a career or hobby.

AOPA will be participating in the “Fly It Forward–Passport to Adventure” event in Frederick, Md., scheduled for March 8 at the Frederick Municipal Airport. The event will feature flights, desktop flight simulators, a “plane pull,” and other hands-on activities for all ages. AOPA’s Women in Aviation chapter will be hosting an activity that teaches the phonetic alphabet. 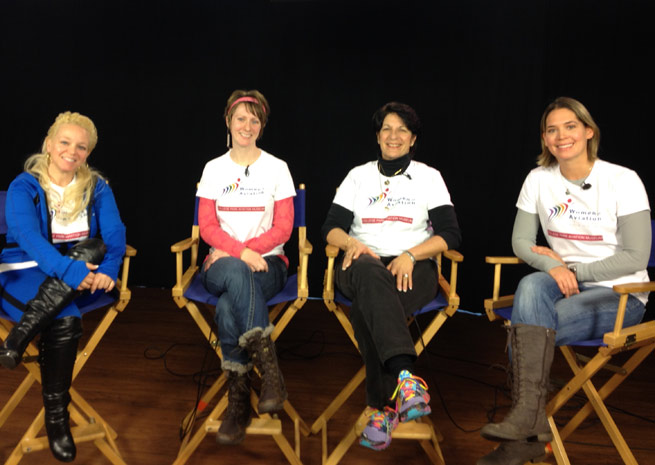