Get the app Get the app
Already a member? Please login below for an enhanced experience. Not a member? Join today
News & Media Documentary chronicles earliest combat pilots

Aviation was new and a great war was imminent. A group of Yale men from among America’s most privileged and affluent families responded to the "personal and sacrificial nature" of their patriotism by forming the nation’s first private militia, learning to fly and rendering heroic service in the skies over Europe.

As the Centennial of World War I approaches in July, a documentary film that tells the story of the "first to fly and the first to die for the United States in the Great War" is nearing completion, said its producers.  The group went by the name of the First Yale Unit—but it was dubbed by the press as The Millionaires’ Unit, a term that stuck, and has been adopted as the film’s title.

The documentary, in production for six years by two California natives and film-industry professionals, Ron King and Darroch Greer, was inspired by Marc Wortman’s The Millionaires Unit a history published in 2006 by PublicAffairs Books. The film focuses on six of the approximately 30 members of the unit. Several grandsons of unit members participated in the project to produce "a character-driven, coming-of-age story told through the words of the young aviators from their letters and diaries," said the announcement of the film’s imminent completion.

"We see and hear them learning to fly in the summer of 1916, training in Long Island and Florida, taking their flight test, joining the navy, and shipping overseas to fight in Europe.  By embracing the new field of aviation when they did, they helped lay the foundations for the U.S. Naval Air Reserve," it said.

The producers filmed on location at sites from England to Masterton, New Zealand, where a mock-dogfighting Sopwith Camel tangled with other period aircraft for the documentary. They also bring the story to life through family photo albums, logbooks, oral histories, letters, and diaries, and from university archives and other sources.

The film’s preview video demonstrates that the producers did not want only to dazzle the audience with thrilling scenes of dogfights and other aerial excitement. Just as vital was to help the audience understand "what it took to fly" just slightly more than a decade after the Wright Brothers’ first flight.

Following the war, many unit survivors continued to serve the nation in high echelons of government, the military, and public service, where, say the producers,  "they influenced military policy and technology, as well as U.S. foreign policy for most of the 20th century."

King and Greer, who met in college at Carnegie-Mellon University in 1977, both reside with their families in southern California, King working in video production and Greer a documentary filmmaker and writer.

In addition to preserving and honoring the commitment made by the unit out of their sense of patriotic duty as pioneer military pilots, the producers "have worked hard to create a personal, character-driven story that sheds light on both a formative, if neglected, part of American history and on the American character with implications for who we are today," they said.

Information about screenings and a detailed look at the biographies of members of the Millionaires’ Unit are available on the film’s website. 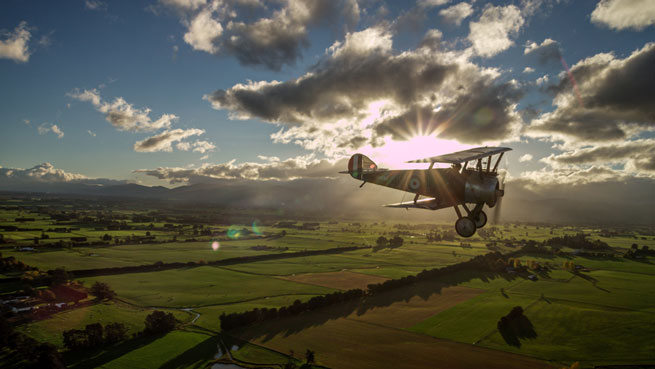