We all know the hassles associated with winter-weather flying. 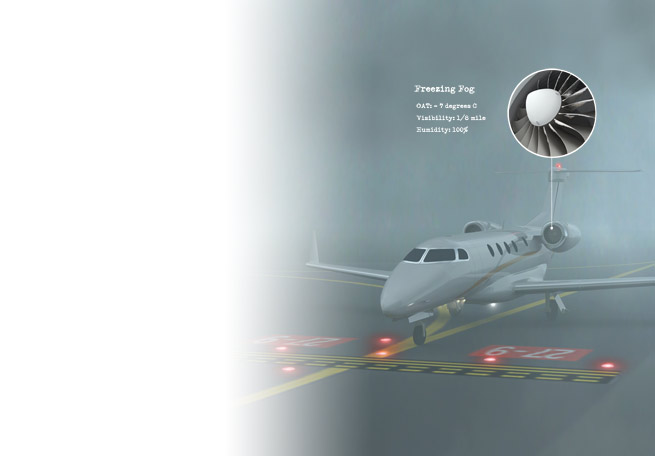 We all know the hassles associated with winter-weather flying. Snowfall in amounts from dustings to full-blown blizzards often requires delays for runway plowing, aircraft deicing, and en route backups. A recent long weekend reminded me forcefully, however, that sometimes the worst winter hassles aren’t snow-related—but instead occur at the intersection of freezing and nonfreezing temperatures, where water and ice can exist in uneasy juxtaposition.

The long weekend began with a regular run in a Phenom 300 from Salt Lake City to Boston. The aircraft had been parked at Salt Lake City for more than a week, and had been hangared the evening before departure. Our biggest concern was whether we’d be landing in Boston that evening or not, as a forecast for six inches of snow had turned into more than two feet in the suburbs—and it was still falling as we preflighted.

The first hint that something was amiss with the local weather had come on the drive to the airport in the early morning darkness. On a raised highway overpass I noticed that the tops of the streetlights were even with the cap of dense fog that had settled over the city. So pronounced was the temperature inversion that the line between fog and clear skies above could have been drawn with a sharp pencil.

Winter inversions are common in Salt Lake City, and they’re particularly likely with snow on the ground; cold, dense air becomes trapped against the surface by warmer air above. High terrain around the airport discourages air mixing, and as a result moisture becomes “dammed” near the ground. While temperatures below freezing often are associated with very dry air in many parts of the country, the Salt Lake City inversion caused relative humidity to stay near 100 percent, creating dense freezing fog (FZFG).

As we prepared the aircraft for flight, the ATIS reported visibility as one-eighth of a mile in FZFG, with a temperature of minus 7 degrees Celsius. It was quickly apparent that even with the airplane having just come from a warm hangar, ice was building, and deicing would be required. Fortunately the deice pad abutted the FBO and our anticipated departure runway, so our delay would be trivial.

So we thought. After starting engines and taxiing to the deice pad—an adventure itself in the dense fog—we noticed pronounced vibrations that seemed coupled to our thrust setting. We had each inspected the fan blades and engine cowl before start, and had found them clear, yet an uneasy feeling led to shutting down the engines on the deice pad for another look at the engines.

It was a good thing we did—the engines had accumulated between a quarter and a half inch of ice, completely coating the rear face of every fan blade. In the short five to 10 minutes between starting up the engines and shutting them back down, they had sucked so much freezing fog through them that what was only a thin coating everywhere else on the airplane was heavy chunks on the fan.

While turbine engines must pass ice-ingestion tests during certification, this amount seemed far more than we were comfortable imagining fly off the blades and into the compressor section as we rolled down a foggy runway. As deice fluid can’t be used on or in an engine, our only recourse was to pull the aircraft back into a warm hangar and let the ice melt completely. Two hours later the fog had burned off, and the sole consolation of our delay was avoidance of a deicing bill in the improved conditions.

Flash forward two days, back in the Northeast where the aforementioned system had passed through, and system number two—this one associated with rain, rather than snow—was scheduled to be in the Morristown, New Jersey, area by the time of arrival. The Weather Channel forecast said that after early morning the temperatures would be climbing quickly into the 40s, and the nearby Newark TAF concurred with a forecast of marginal VMC by 1100 local and the morning’s freezing precip passing through well before our afternoon arrival.

However, the actual conditions on arrival in a new Cessna M2 were very different. The ATIS advertised winds calm, and one and a half miles of visibility in light drizzle. Equally troubling was that the temperatures had stubbornly stayed just below freezing. Braking reports were between poor and medium, indicating a possibility that the runway was experiencing contamination beyond simply wet conditions.

The absence of any crosswind component, combined with the M2’s effective speed brakes and ground flap setting, made for good aircraft control on landing—and with my student’s textbook on-speed landing just inside the 1,000-foot marker, the antiskid stopped the airplane in less than 3,000 feet of ground roll. Our biggest hassle on arrival wasn’t the landing or taxi in, but the fact that the ramp entrance was blocked by a Challenger being deiced. Wait! A Challenger doing what? That was the first hint that things had taken a turn for the worse in New Jersey.

Our postflight walkaround demonstrated the importance of conducting a tactile check of the wing when the temperature is near freezing. What appeared from just a few feet away to be droplets of water beaded on the upper surface of the wing were, in fact, droplets of ice. Freezing precip wasn’t falling yet, but the OAT and aircraft surface both were just below freezing—so as the water sat on the aircraft wing, it cooled and started sticking. Deicing clearly would be called for before departure if the air didn’t warm.

We were due for lunch, in any event, and the layman’s iPhone forecast still indicated that at any second the temperature would leap up 10 to 15 degrees Fahrenheit, so we blithely set off in a crew car expecting New Jersey to sort its problems out by the time we returned. Within 20 minutes of shutting down, a new ATIS was cut—the airport was closed for runway treatment, and the precip had changed to freezing drizzle.

Walking to the airplane after lunch became distinctly challenging, as the freshly fallen rain evened out any existing snowpack texture and froze into a perfectly smooth sheet. The expected one-hour-later airport reopening never occurred—the temperature stayed just under 0 degrees C, and the braking action reports from the airport truck went from poor to nil. After several hours at the FBO hoping for the promised warming, it became clear the temperatures would stay below freezing until after midnight, and the airport wouldn’t be reopening as long as the skating-rink runway surface persisted.

At 5 p.m. we accepted the writing on the wall; our plan for a quick turn morphed into an unplanned overnight. Even the drive to the hotel was treacherous, with the roads thoroughly coated in black ice. Twice in three days—first as super-cooled water in the form of freezing fog, then as just-barely-above-freezing-drizzle landing on a below-freezing runway—moisture on the boundary of the freezing line proved more exasperating than a nice, clean snowfall. Winter never fails to surprise.