Daher-Socata on March 12 introduced its new TBM 900, a faster, more efficient successor to its TBM 850. The TBM 900, starting at $3.71 million with standard equipment, benefits from a number of improvements thanks to a four-year effort aimed at a close examination of the TBM design concept. Dubbed the “Century Project” internally, the company first studied the airplane’s aerodynamics using computational fluid dynamics. Using a computer model known as Fluent, engineers discovered several areas where the TBM could reduce drag and gain speed.

The first area was the engine air intake and plenum chamber. Turbulent flow existed on the right side of the intake plenum, just aft of the air intake lip. By narrowing and slightly canting the intake, and moving the propeller disc four inches closer to it, the TBM 900 gained six knots’ worth of drag reduction. Additional drag-producing turbulence was found in the exhaust stacks. The bend in their radiuses was too acute, with the result that turbulence existed at these points. By flaring the stacks slightly outboard, the turbulence was eliminated and another one to two knots was gained as a result. “It’s as though we picked up 50 horsepower’s worth of free thrust,” said Nicolas Chabbert, senior vice-president of Daher-Socata’s Airplane Business Unit.

Similarly, studies showed that the TBM 850’s inner main landing gear doors were creating three knots’ worth of drag, so these were eliminated in favor of a single pair of doors. 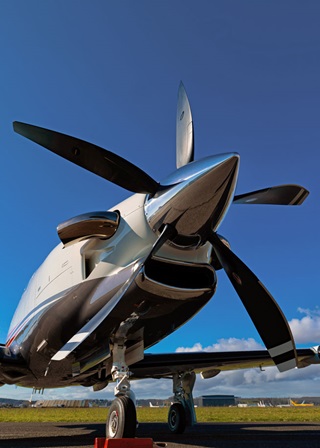 Two other big changes produced significant improvements in takeoff and climb performance. The most obvious is the new Hartzell propeller, with five swept blades made of carbon fiber. But the real secret to the TBM 900’s up to 15-percent improvement in initial climb rates comes via the availability of all 850 shaft horsepower of the airplane’s PT6A-66D turboprop engine. The TBM 700 and 850 models were limited to 700 shp for takeoff through a torque limiting system that’s activated when the flap switch is put in the "Takeoff" position. Though the 900 uses the same engine, the limit is now bumped up to the full 850 shp.

This gives the TBM 900 a 17 minute, 15 second time to climb to its maximum operating altitude of FL310 under international standard atmosphere (ISA) conditions—a 14-percent improvement over the TBM 850. As for takeoff distances under sea-level, standard conditions the 900 needs just 2,380 feet to clear the FAA-standard 50-foot obstacle, whereas the 850 needed 2,840 feet. Hot-and-high takeoff margins are even greater—with reductions of between 16 and 23 percent compared to the TBM 850. For example, Daher-Socata says at an elevation of 8,000 feet and ISA + 30 degrees, the TBM 900 needs 4,185 feet of runway; the 850 uses 5,450 feet. 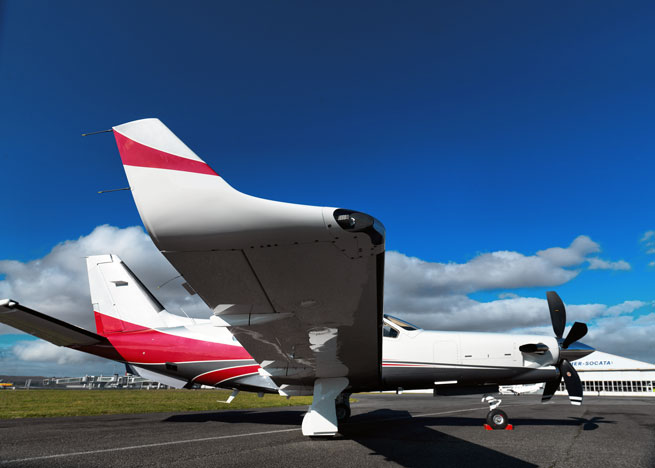 Other aerodynamic changes include winglets, which improve aileron effectiveness at high angles of attack, and produce a “rail effect” that boosts directional stability. Additional directional stability is provided by a new, longer dorsal fin. The winglets have embedded Whelen LEDs, like the rest of the airplane’s external lights. The winglets will also be able to accommodate forward-looking infrared (FLIR) sensors once a suitable FLIR system is selected, Daher-Socata said. 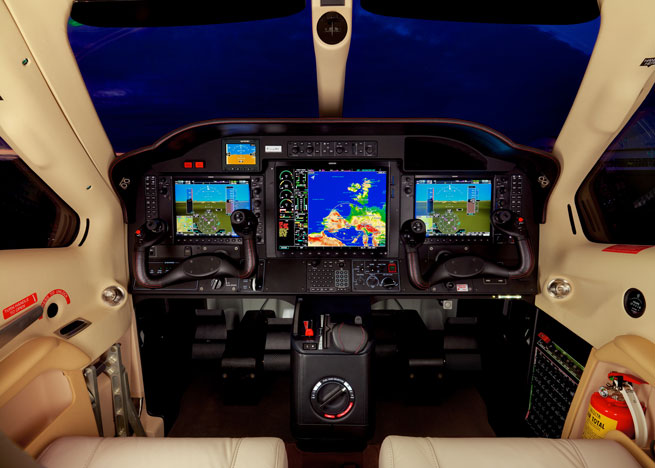 Radical changes also mark the TBM 900’s cockpit, which is now easier to enter and exit thanks to a center pedestal that’s been narrowed and rounded at the base, and front seats that are slightly less wide than the 850’s, and which have lateral support of the type seen in many high-end cars. The pilot door, which used to be an option, is now standard on the TBM 900; going door-free is now the option.

Don’t look for a propeller control or condition lever on the center pedestal. A new, single power lever combines both power and propeller control functions. The new propeller is electrically governed by a system from Czech supplier Jihostroj that keeps prop rpms near the 2,000 rpm redline. A lower-case “h”-looking gate arrangement lets you move the single lever from the fuel cutoff to low- and high-idle positions (the rightmost half of the gate run), then to the power control side of the “h” (the left half of the gate run) by moving the power lever to the left. Now you can control forward-, beta-, and reverse thrust in the conventional way. 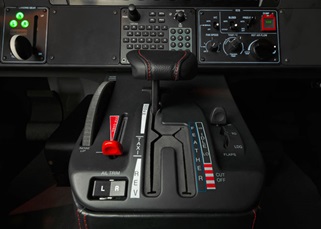 There’s a new electrical system as well. The 900 has a new 300-amp starter-generator (the 850 and 700s have 200-amp systems), and the starter cuts off automatically at 50-percent NG during the start sequence. Daher-Socata says battery starts now take just 30 seconds to complete; a GPU-assisted start, 15 seconds. A 100-amp standby generator is another new standard feature. Still other standard features are new with the TBM 900 include these:

In short, the TBM 900 is the most optimized variant of the TBM series, and the fastest and most capable. It also has the biggest price tag, starting at $3.71 million. But the day I was at the Daher-Socata factory to fly the first TBM 900, that didn’t seem to be a deterrent in the marketplace. Production had already begun on the 900 (850 production stopped at serial number 684), and the order book stood at 40 airplanes—all bought sight unseen. That’s more than the total number of TBM 850s sold in 2013. And Daher-Socata had yet to reveal the airplane to the public.

You can read more about the TBM 900 in the April 2014 Turbine Pilot section of AOPA Pilot magazine. 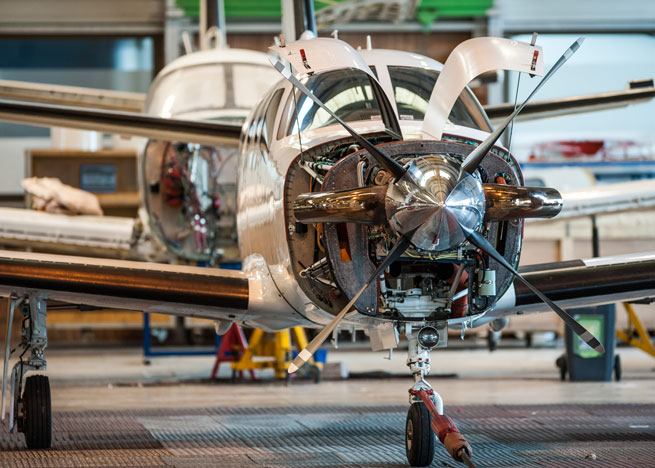 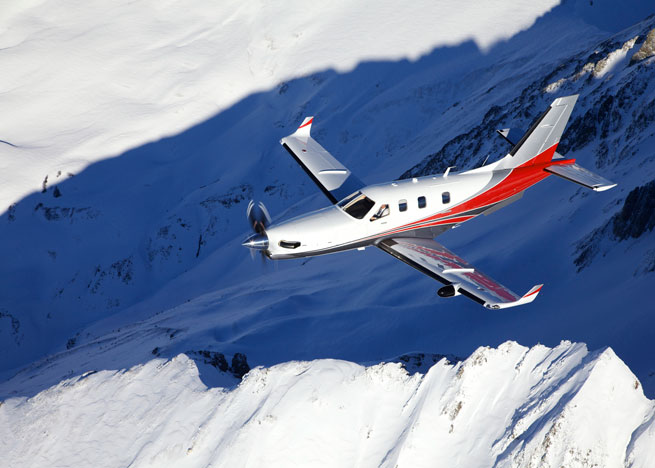 AOPA Pilot Editor at Large
AOPA Pilot Editor at Large Tom Horne has worked at AOPA since the early 1980s. He began flying in 1975 and has an airline transport pilot and flight instructor certificates. He’s flown everything from ultralights to Gulfstreams and ferried numerous piston airplanes across the Atlantic.
Go to Thomas A. Horne's Profile
Topics: Technology, Jet, Aircraft Systems