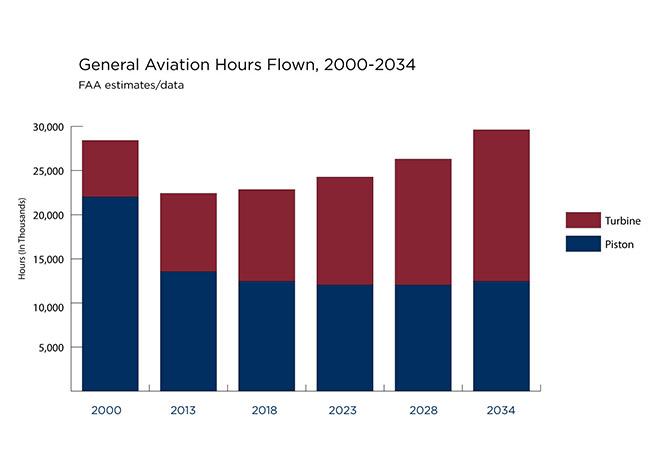 The FAA predicts that turbines will offset expected losses in general aviation piston aircraft, and surpass the piston fleet in terms of hours flown for the first time within a decade.

The agency released on March 13 its annual forecast of aviation activity, predicting a significant increase in demand for scheduled service (both passenger and cargo) in the coming 20 years, while hours flown by the general aviation fleet are expected to increase only on the strength of turbine-powered aircraft.

The agency predicts average annual airline travel growth of 2.8 percent over the coming two decades, with revenue passenger miles expected to be 76 percent higher in 2034 than the 2013 levels (still estimates). The airline industry carried 745.5 million passengers in 2013, expected to increase in 2014 by just under 1 percent, and to top 1.15 billion passengers flown by 2034.

General aviation, meanwhile, is predicted to continue a long-running decline on the piston side. The FAA predicts slight but steady increases in overall general aviation activity (including air taxi service), driven by increases in jet and turboprop activity. Total fixed-wing piston hours flown accounted for 73 percent of general aviation activity in 2000, while fixed-wing turbine aircraft accounted for 21 percent of the total hours flown that year. In 2013 (based on estimates), the piston fleet accounted for 56 percent of the nearly 24 million GA hours flown, with fixed-wing jet and turboprop aircraft representing 37 percent of the GA total. By 2034, the FAA predicts, the piston fleet will represent less than half of all GA activity (38 percent), and turbine activity will account for 53 percent. If the FAA predictions hold true, turbine activity will surpass piston activity within the GA sector for the first time in 2023, and the trend will continue.

Government officials, in a news release, focused their attention entirely on predicted increases in revenue-producing aviation.

“The aviation forecast is strong and we predict the use of our airports and airplanes will only rise, which is why we are committed to investing in aviation and taking the steps necessary to maintain improvement in the industry,” said U.S. Transportation Secretary Anthony Foxx, in the news release. 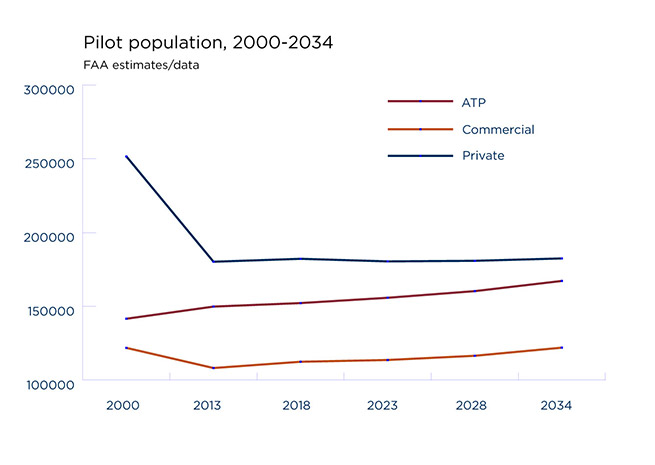