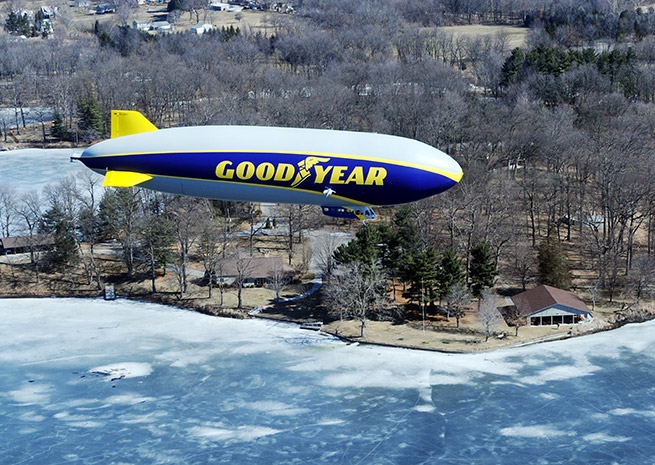 The newest generation of Goodyear Blimp lifted off March 17 and cruised the Ohio sky, opening a new chapter in the storied history of an advertising icon that is among the most recognizable in the world.

Built to replace a retiring generation of blimps, the new Goodyear Blimp is actually an airship, distinguished from a true blimp by a rigid internal frame. The international tire giant has long since made clear it will not let such technical distinctions stand in the way of continuing a brand name that has endured for decades.

The company will, however, offer prizes (including a chance to ride the new airship with up to five guests) to the author of the new airship’s name, announcing a naming contest with an April 4 entry deadline. 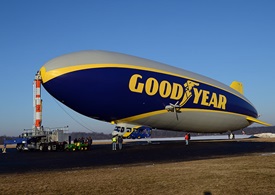 Constructed in a massive hangar at Goodyear’s Wingfoot Lake facility by technicians from Goodyear and Germany’s ZLT Zeppelin Luftschifftechnik, the new airship is larger, faster, and much more maneuverable than its predecessors. A massive wooden elevator wheel and pull-cord controls for the ballonets—manual controls in use since 1925—have been replaced by a sophisticated fly-by-wire system with sidestick control. The new airship has three thrust-vectoring engines that allow the pilot to maneuver much more precisely, and landing the new airship can be accomplished without a large ground crew to wrangle the ship into mooring with ropes.

“The completion of the new blimp marks the beginning of a new era for our airship program and reflects Goodyear’s commitment to remaining at the forefront of aerial broadcast coverage and support,” said Paul Fitzhenry, senior vice president of global communications, in a news release. “This airship will offer enhanced aerial television coverage capabilities, increased flight range to cover more events and an unparalleled passenger experience.”

Pilots will train on the new blimp over the coming two months, and the new airship will enter service in the summer.