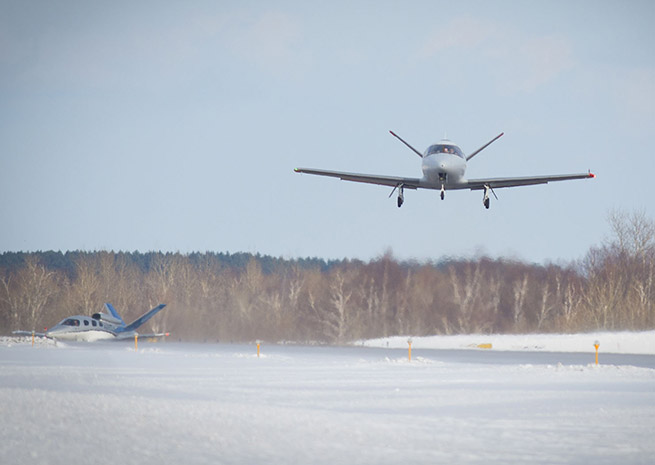 A one-hour sortie flown March 24 confirmed that the Cirrus Vision SF50 jet performed as expected in the first certification flight test of the new design. Company officials said the new Vision jet, a clean-sheet design that aims to fill a gap between high-performance piston singles and light jets, could be delivered to the first of more than 550 waiting customers by the end of 2015.

"The Vision Jet handled and performed very well and all systems functioned properly,” said Cirrus Aircraft Director of Engineering Flight Test and Chief Test Pilot Mike Stevens, in a news release. “Just what you want in a first flight.” 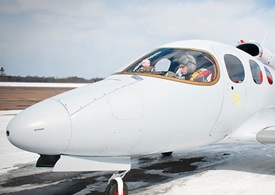 Cirrus has logged hundreds of hours in SF50 prototypes since 2008, and weathered a financial downturn that stalled the jet program until the company was bought by China Aviation Industry General Aviation Co. Ltd. (CAIGA). The new owners restarted the SF50 program with a $200 million cash infusion in 2012, augmenting the $45 million already spent developing the V-tailed design. Progress accelerated rapidly, and the aircraft Stevens flew March 24 is one of three built for certification testing, using production-ready drawings and tooling.

“In the last 12 months we have made such great progress in all areas of the program and we anticipate fulfilling the first of our 500-plus customer reservations late next year," said Cirrus CEO Dale Klapmeier, in a news release.

The SF50 has seating for five adults, and can tuck another “two smaller passengers” into its cabin, the company noted. The 300-knot jet retails for $1.96 million, and Cirrus reports its handling characteristics are similar to the popular SR20 and SR22 piston models that the company has sold in increasing numbers in recent years, which should ease the transition to the SF50 for pilots experienced in those SR models. The jet also shares with other Cirrus models the Cirrus Airframe Parachute System, credited with saving 87 lives, and carbon fiber construction.