Get the app Get the app
AOPA Members DO more LEARN more SAVE more - Get MORE out of being a pilot - CLICK HERE
News & Media Continental, ASI acquire rights to twin Cessna F406 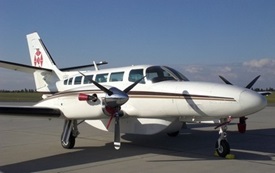 Continental Motors has teamed with ASI Innovation of Reims, France, to purchase the type certificate and production rights for the Reims F406 twin-engine turboprop formerly produced in the 1980s by Reims Aviation. It was based on the Cessna 404 and was similar to the Cessna 441. Continental will return it to production and oversee commercial applications, while ASI will oversee government sales. It will be offered as both a Pratt and Whitney PT-6 turboprop and as a piston-engine airplane with either gasoline or diesel engines.

The two companies will serve the existing fleet as well. The F406 is an unpressurized, 14-passenger turboprop aircraft first flown by Reims Aviation Industries in 1983. "We are pleased by the acquisition of this great airframe," Continental Motors President Rhett Ross said in a news release. "We will be excited to see it return to production in both a turbine and piston engine configuration to meet global demand for a cost effective twin engine utility aircraft."

Continental Motors also has partnered with ASI Innovation for custom design and installation services for a variety of aircraft.

Additionally, ASI will become a distributor for Continental products in Europe. As the relationship matures, ASI will be a preferred source for developing supplemental type certificates and product customization requested by customers for the turboprop and piston versions of the future F406. Continental Motors is a subsidiary of AVIC International Holding Co. of Beijing, China.