Seven decades after Earnest McCauley introduced the solid steel propeller, the company that is his legacy announced on May 9 FAA certification of a carbon composite, three-blade, constant-speed propeller. A patented continuous loop blade retention system contributes to significant weight reduction, according to a press release, making the McCauley Blackmac Carbon Series the lightest constant-speed propeller certified for up to 350 horsepower. 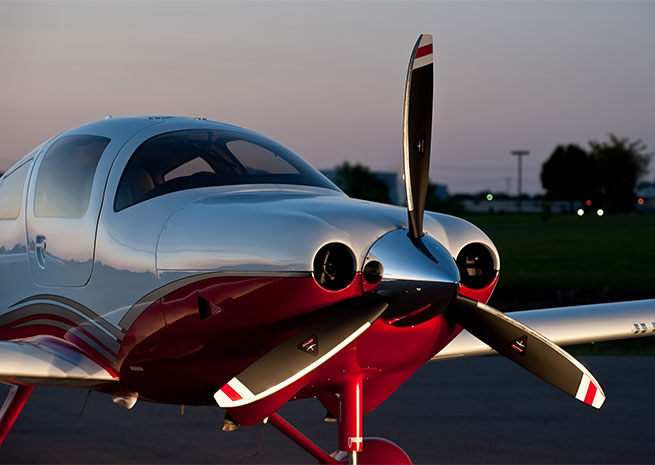 A spokesperson for Textron Aviation, parent of Cessna Aircraft Co., which is in turn the parent of McCauley Propeller Systems, noted in a May 13 email to AOPA that the new propeller weighs between 42 and 45 pounds installed, and will have a base price of $18,000 (subject to change). The company is working on retrofit installations for Cirrus SR22 models and the Columbia 400/Cessna 400 that will be available under a supplemental type certificate. It remains to be seen which other aircraft and engine combinations will be added to that list.

Textron has the new propeller on display at an unmanned vehicle convention in Florida this week, a first public appearance for the new system.

The Blackmac Carbon Series propeller is certified with no maximum service life, and an overhaul interval of 2,400 hours or 72 months. It has 25 percent fewer parts than a comparable aluminum propeller. The scimitar blades are fitted with electro-formed nickel leading edges for durability.

“The low weight of the Blackmac Carbon Series propeller, offers the ability to improve payload without compromising strength or weight in other areas,” said McCauley Business Leader Scott Howell, in a news release. “McCauley has spearheaded innovation in the propeller industry for generations.”