Get the app Get the app
AOPA will be closed on Monday, January 2020, in observance of Martin Luther King Jr. Day.
Already a member? Please login below for an enhanced experience. Not a member? Join today
News & Videos Do flying clubs make flight training more affordable? 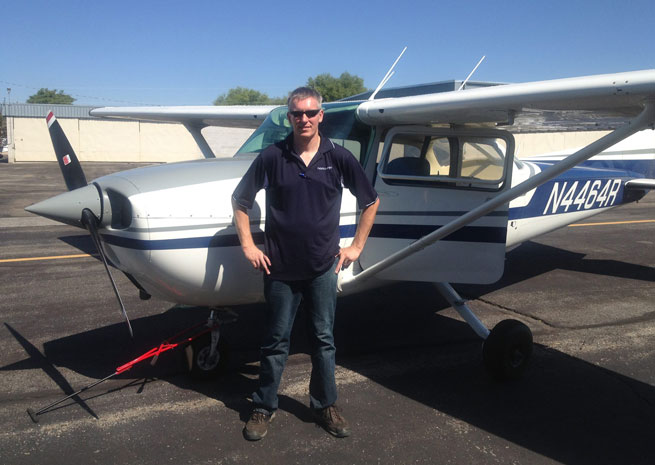 The biggest benefit of belonging to a flying club is that it’s less expensive than owning an aircraft, according to an AOPA report on the subject. But other benefits include having access to good flight instructors and offering an affordable option to getting a private pilot certificate.

Sarah Rovner used the Bay Area Aero Club, based at Texas’s Pearland Regional Airport, to earn her instructor certificate, and has also taught club members going for their certificates. She is also a member of Houston’s Southwest Flying Club. She offered several reasons for learning through a flying club.

“First, I liked the instructor. Also, it was the most cost-efficient way to do my training,” said Rovner. “A lot of people in our club have day jobs, and many flight schools don’t have much evening availability for flight lessons.”

Kevin Bentley joined the T-Craft Aero Club in Nampa, Idaho, in April 2013 specifically to get his certificate. “Initially I contacted the club because it looked like a cheaper way to get my private pilot license. But when I contacted Jim Hudson, who is the membership and safety director of the club, he gave me a tour of the hangar,” he said. “When I found out he was also an instructor I was sold. He was very welcoming and friendly and I felt like he would be a great instructor, and he was.”

Bentley took his discovery flight on April 23, 2013, and took his checkride on Sept. 11, 2013. “When I was training for my license, I was flying two to three days a week, weather permitting,” he said. “I think I got a lot out of flying frequently in the beginning because everything stayed fresh in my mind.”

Greg Kaiser joined the Westosha Flight Club in Wilmont, Wis., in 2012, because he said it was the cheapest option around for flying. “I started taking lessons outside a club environment when I was 10 or 11 and stopped when I was 15, due to financial reasons. I re-started when I was 35 years old,” he said. “When I re-started in 2012 I tried to take lessons [three times] a week unless weather interfered.”

All three highly recommend flight lessons through a flying club. “I leaned toward a flying club because it was more cost effective and you have a greater choice of instructors. My club has more than 30,” she said. “Plus our instructors tend to stay, so you don’t suffer from those who leave” at flight schools.

There are not a lot of surprises with flying club aircraft, said Rovner. “Clubs have that extra level of concern and safety, and their main source of income isn’t based on aircraft costs and students like flight schools,” she said.

Kaiser said he probably saved almost $5,000 by learning through the Westosha Flight Club. “I prefer a club because around me all the rental fixed-base operators had daily minimums on their rentals. I learned to fly to go places and take vacations, and having a daily minimum made that mission even more expensive,” he said. “Fortunately for me my club has no daily minimums, so it was a no-brainer for me, along with being cheaper than all the schools around.”

Bentley estimated that he saved at least $3,000 getting his private pilot certificate at the T-Craft Aero Club. “It cost me about $7,500 to go from zero hours to my license through the club,” he said. “And as long as I continue to fly frequently, I save a lot of money. As much as owning my own aircraft appeals to me, all the analysis I've done shows I save a lot of money by being a member of T-Craft.”