Get the app Get the app
Already a member? Please login below for an enhanced experience. Not a member? Join today
News & Media Rotorcraft Rookie: Checkride success

No one enjoys checkrides. Strike that. No student enjoys checkrides. Some examiners seem to enjoy them immensely. Regardless of the fact the FAA has certified the capabilities of every flight instructor in the country, we are all still forced to show up on judgment day and perform for a third-party. Initial certificate or an add-on category or class, it’s the same story.

I’m terrible at checkrides. I suppose most pilots are. We are generally at our worst when the stress level is high. I’ve had examiners yell at me, a Santa Claus type who failed me at the end after letting me think I had passed, and others who seemed more interested in taking my money than giving me a learning opportunity. So when the two options presented to me were a “nice guy” that required me to fly an hour and a half round-trip, or a “tough but fair” examiner who would come to me, the choice was easy. Pilots might hate checkrides, but we hate overpaying even more.

Maneuvers: All of them!

Reputations can be deceiving. I found the examiner to be polite, respectful, and funny, but serious about his responsibilities (probably the source of the reputation). He was clear in his expectations and didn’t pull any tricks or conspire to fail me in any way.

Both the flight and oral exams are abbreviated for the add-on. There’s no requirement to do cross-country and navigation, weather, aeromedical factors, and night operations. That led to a three-hour oral—including the paperwork—and a 1.3-hour flight.

Checkride day dawned with clouds at 600 feet overcast with little prospect for improvement. We went forward with the oral and I made the easy decision to discontinue after we were finished. The oral is always the unknown on a checkride. The FAA’s practical test standards make flying the aircraft an obvious objective exercise. But with phrases such as, “Demonstrates the use of appropriate charts, tables, and data,” the oral exam can go anywhere from a simple identification of each chart to a detailed discussion of what is a limitation versus a recommendation, why it’s that way, and what the pilot is supposed to do with that information. In my case, the questions were scenario-based, meaning he asked about real-world situations, the answers to which require a deeper knowledge. Instead of simply asking me to compute maximum continuous power based on the current conditions, for example, we had a detailed discussion about what would happen at altitude, whether that chart is a limitation, and how I would change my actions as a result. Speaking as an instructor, I think this is a great approach that all students should be exposed to. Simply reading the chart isn’t enough. We must be able to understand what it’s telling us and why. 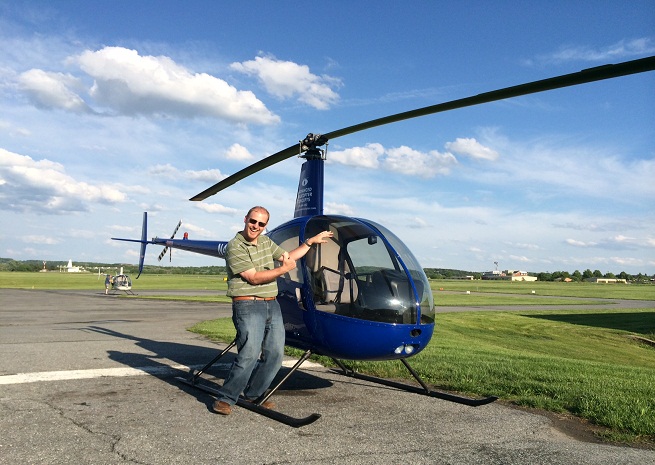 Although we had agreed to meet the following Wednesday for the flight, I got a call Saturday morning saying he could meet me in two hours. With little time to get nervous I was happy to rush to the airport. I got the helicopter ready, he briefed the flight, and we were off.

I found adding a category to a certificate is significantly more in-depth than adding a class or additional instructor rating. We did at least 12 distinct maneuvers, not including combinations, such as a confined-area landing with a steep approach and maximum-performance takeoff. Even though it wasn’t my best hour and 18 minutes of flying, it was good enough to meet the standard, and I got the proverbial handshake and congratulations.

The photo pretty much says it all. As I write this, four days have passed since the checkride and I haven’t gone more than a waking hour or two without thinking of helicopters. Being able to sit there, motionless, four feet off the ground still seems magical to me. I hope it always does.

Next time: The top 10 things I learned from helicopter training