Get the app Get the app
AOPA will be closing at 1:45pm ET on Tuesday, December 6th. We will reopen Wednesday morning at 8:30am ET.
AOPA Members DO more LEARN more SAVE more - Get MORE out of being a pilot - CLICK HERE
News & Media Training Tip: Preflight perfect

Remember your introduction to the preflight inspection of your trainer? This was an entirely new idea, far removed from how automobile drivers approach the idea of hitting the road.

Not only does the preflight rigorously follow a detailed checklist. You quickly learned that there even were some novel-looking accessories involved, like that strange looking gadget that lets you draw a fuel sample and check it for proper grade, water, or other contaminants. (How and when to draw and evaluate a fuel sample is discussed in the Air Safety Institute’s "Fuel Awareness" Safety Advisor .)

The idea of healthy skepticism about indications on cockpit gauges was introduced at this point; a fuel gauge indicating full should always be corroborated with a look inside the tanks. If a tank is less than full, another gadget allows you to "stick the tank" to get an accurate idea of fuel quantity. There were orderly methods to check the oil and remove control locks, cowl plugs, the pitot cover.

In short order you realized that to start preflighting—in aviation, "preflight" is a verb or a noun—you don’t have to be standing beside your aircraft. The process begins the instant you spot it on the ramp and can assess its general condition: A flat tire or a deflated nosewheel strut is visible from afar. Leaking fluids become noticeable as you approach. Glancing at the tie-down ropes tells you whether you, or another pilot, did a good job of securing the aircraft against last night’s post-frontal winds. (Don’t forget to remove and store the wheel chocks.)

Now that those chill winds are calmed, don’t forget to include a check for frost or ice accumulations in your "walk-around," as the preflight's preliminary stage is known.

Don’t call that task complete after inspecting the wings and tail. "Also, make sure that control surfaces contain no internal accumulations of ice or debris," says the pilot’s operating handbook for a 1980 Cessna 152.

The preflight inspection is such a critical part of a pilot’s safety routine that an introduction to preflighting an aircraft was one of the seminars that teachers in Michigan could choose to attend during a recent STEM in Flight workshop, of which AOPA was a sponsor.

STEM stands for science, technology, engineering, and math. In aviation, the teachers learned, safety is an important part of the science. 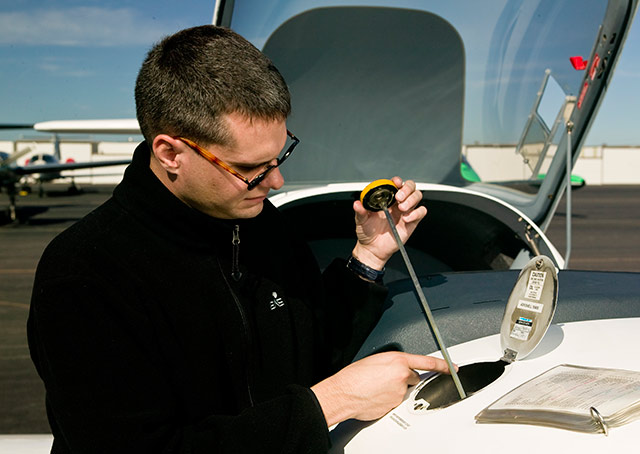