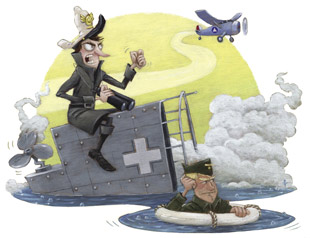 1. From reader Rick Cohen: True or False? The Civil Air Patrol was created one week before the Japanese attack on Pearl Harbor to fly coastal patrol in light aircraft and search for German submarines. These small CAP aircraft sank at least one German sub.

3. True or False: One reason that the Luftwaffe’s World War II fighter, the single-engine Messerschmitt Bf 109E, had such a good glide ratio is that its piston engine drove a full-feathering propeller.

4. A pilot performs a wings-level, power-off, 1-G stall in a typical single-engine airplane with the gear and flaps retracted. He notes that the indicated stall speed is less than normal. One reason for this might be that
a. the center of gravity is unusually far forward.
b. the center of gravity is unusually far aft.
c. one of the two static ports is clogged.
d. aircraft gross weight is excessive.

5. From reader John Schmidt: Most warbird aficionados are familiar with the Grumman F4F Wildcat, but what was the Grumman Wildcatfish?

6. A cold front overtakes a warm front and lifts off the ground the relatively warm air mass that had separated the fronts. What is this phenomenon called?

7. The Mooney M–18 Mite is a single-place, single-engine, low-wing airplane that has retractable landing gear and was introduced in 1947. What is so unusual about the gear-warning system that alerts the pilot when he might be in danger of making a gear-up landing?

8. True or False? Overpriming an engine can cause a loss of compression.

3. True. A switch on the throttle allowed the pilot to adjust propeller pitch between 22.5 and 90 degrees. (The airplane did not have a constant-speed propeller.)

4. (b) Stall speed reduces as the center of gravity moves aft and increases as it moves forward (for a given gross weight). An airplane with an aft CG also flies faster than when it has a forward CG, a consideration for those who race airplanes.

5. The Grumman F4F-3S Wildcatfish (or Wild Catfish) was the F4F-3 modified with Edo floats. It was developed for use at forward island bases in the Pacific where runways had yet to be constructed. It was inspired by the Mitsubishi A6M2-N, a floatplane modification of the Mitsubishi A6M2 Zero.

6. An occluded front (or an occlusion).

8. True. The excess raw fuel washes oil from the cylinder walls and dissolves the oil seal normally formed between the piston rings and the walls.