Get the app Get the app
AOPA will be closed July 4th, in observance of the Independence Day holiday. We will reopen at 8:30 am ET on Tuesday, July 5.
News & Media Mentor Matters: Descend/climb via procedures

Jet pilots often face arrival and departure procedures that are significantly more complex than those flown in pistons or turboprops. 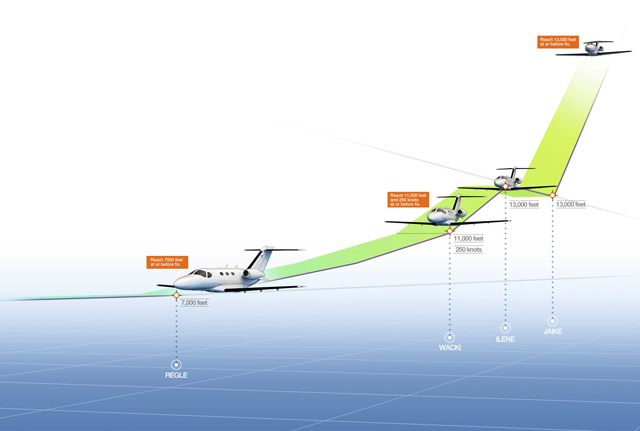 Jet pilots often face arrival and departure procedures that are significantly more complex than those flown in pistons or turboprops. The greater speed of jets requires that a more tightly scripted lateral path be flown, often beginning or ending hundreds of miles from the arrival or departure airport. More and more standard instrument departures (SIDs) and standard terminal arrivals (STARs) are dictating not just lateral paths, but mandatory vertical paths, as well. These “climb via” and “descend via” procedures add a new level of complexity to turbojet IFR flight, especially for single-pilot operations.

An often flown “descend via” STAR is the JAIKE THREE (see illustration), serving Teterboro, New Jersey (TEB), and surrounding airports. Starting about 100 nm from Teterboro, four fixes on the STAR display mandatory altitudes—as opposed to the more typical “expect” altitudes. Jeppesen charts make it clear the altitudes are mandatory by explicitly stating “at” prior to each: JAIKE must be crossed at 13,000 feet, ILENE at 13,000 feet, WACKI at 11,000 feet, and REGLE at 7,000 feet. NACO charts display these mandatory altitudes the same way they are displayed on approaches—with a solid bar both above and below the altitude; “at” is not explicitly labeled.

The presence of mandatory altitudes on a charted procedure does not automatically confer clearance to fly them. Rather, a pilot will receive an explicit “climb via,” or “descend via” clearance, e.g., “Citation Three-Four-Five, descend via the JAIKE THREE arrival,” which must be read back verbatim. In this case the pilot should, when he deems appropriate, begin descent so as to be level at 13,000 feet at or before JAIKE. He would then remain at 13,000 feet until passing ILENE, where descent to 11,000 feet could begin so as to be level by WACKI; after WACKI the descent to 7,000 feet must be complete by REGLE.

Modern integrated flight decks nicely automate the execution of such a procedure. By simply selecting the lowest altitude on the arrival (7,000 feet at REGLE) and arming the autopilot’s vertical navigation path tracking (VNAV), the aircraft will descend so as to comply with the charted altitude restrictions, requiring the pilot only manage thrust as needed. Older flight decks require the pilot to step down from fix to fix manually: selecting the next altitude, initiating descent, and calculating necessary vertical speed each time.

Helpful to remember is that both vertical and speed restrictions are predicated on the lateral path being flown. Any time an aircraft is vectored off a SID/STAR the “climb/descend via” part of the clearance is canceled, as are any charted speed restrictions. In this case ATC will issue an altitude to maintain, and unless a specific “maintain x speed” clearance is given, speed is now at the pilot’s discretion.