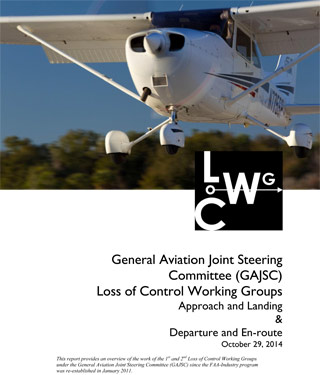 The report to the General Aviation Joint Steering Committee (GAJSC) was submitted Oct. 29 by the Loss of Control Working Groups. The panels analyzed National Transportation Safety Board reports and dockets from accidents in the approach and landing phase, and the takeoff and departure phase of flight. The working groups were co-chaired by David Oord, AOPA manager of regulatory affairs, and Kevin Clover, representing the FAA’s General Aviation and Commercial Division.

Oord urged pilots and members to study the safety recommendations and apply them in their personal flying to lower their risk of losing aircraft control—the cause of 40.2 percent of fatal accidents between 2000 and 2010.

The safety enhancements emerged from over three years of evaluation and analysis, and constitute a wide-ranging plan of action identifying needs from the increased use of angle of attack indicators in GA aircraft to transition training for pilots; reducing regulatory roadblocks to aircraft certification; and improved pilot medical education.

"Everyone involved focused their resources on the accepted data-driven process of analyzing the accidents, coming up with interventions to solve the identified risks, and implementing agreed upon safety enhancements to better manage those risks," Oord said, emphasizing the importance of devising and applying methods that assured "analytical credibility" for the project.

To make the final list of recommendations, safety enhancements were ranked for overall effectiveness, and evaluated for the likelihood of successful adoption.

"Only the interventions which scored the highest for each parameter were recommended, better utilizing and focusing the limited resources of both government and industry,” he said.

A safety program focusing on improved aeronautical decision making should be developed for general aviation, and flight training should make pilots aware of a link between over-reliance on automation and loss of control, the report said in two other individual safety enhancements.

Other safety enhancements among the 29 published in the report covered topics ranging from the risks faced by inactive pilots returning to the cockpit to advances in the availability of real-time weather information. Additional safety enhancements addressed cockpit resource management, flight testing of experimental aircraft, airman certification standards, and a variety of aviation medical education topics.

For each safety enhancement, the report identifies an organization expected to take the lead in coordinating its enactment, and specifies a completion goal.

The General Aviation Joint Steering Committee, first formed in the 1990s under a "Safe Skies" initiative, was reactivated in 2011 after several years of dormancy to refocus the joint government-industry effort to reduce fatal GA accidents. The committee is co-chaired by the AOPA Air Safety Institute and the FAA.

Dan Namowitz has been writing for AOPA in a variety of capacities since 1991. He has been a flight instructor since 1990 and is a 35-year AOPA member.
Go to Dan Namowitz's Profile
Topics: Advocacy, Training and Safety, Scholarship