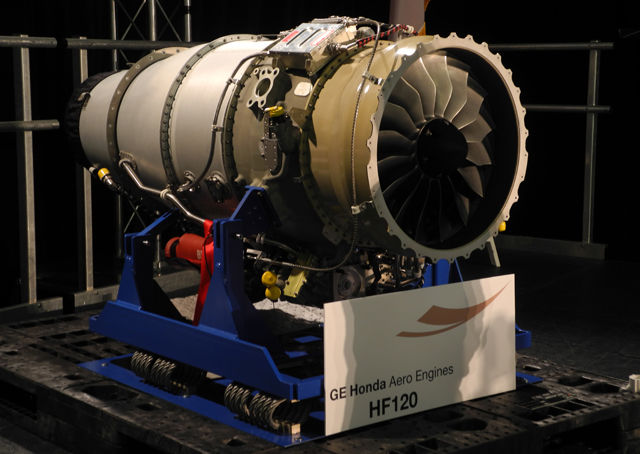 The HondaJet has made yet another step toward its certification goal of early 2015. Officials held a press event Nov. 12 showing off Honda Aero Inc.’s newly completed engine manufacturing facility in Burlington, North Carolina.

The factory has recently earned a provisional production certificate from the FAA, which allows the company to deliver the first of the HondaJet’s 2,050-pound-thrust HF120 turbofan engines. In the next four weeks, Honda Aero will have delivered four engines to the Honda Aircraft Co., located in nearby Greensboro, North Carolina. By the end of the year, Honda Aero expects to deliver a total of six engines. Next year, the company said it expects to deliver 100 engines, destined for the first 50 production HondaJets.

Inspections continue at the Burlington factory, and full production certification is expected in the first quarter of 2015—just in time for the HondaJet’s certification. Ultimately, the Burlington plant will be capable of producing one engine per day, a Honda Aero spokesman said. To meet that demand, the company said it will add 30 more employees to the current roster of 70.

Honda Aero emphasized that the HF120 is just the beginning of a new family of engines, and that Honda Aircraft is just one of its customers. So far Sierra Industries of Uvalde, Texas, has signed on to buy HF120s for use in several of its Cessna Citation modifications. According to Honda Aero, Sierra will use the HF120 as part of its upgrade offerings for the Citationjet, CJ1, and CJ1+ airplanes. Those engine deliveries will come at a later time, a Honda spokesman said, emphasizing that the company wants to “start small.”

The HF120 is now in the second phase of a TBO (time between overhaul) evaluation program, but by the time the HondaJet enters into service the engines will come with 5,000-hour TBOs.

Initially, HondaJet dealers will ship engines to the Burlington plant for repairs, inspections, and maintenance. In the future, HondaJets could fly to the nearby Burlington-Alamance Regional Airport and taxi to the facility. “That’s my goal,” said Tony Brandewie, Honda Aero’s vice president of plant operations. “After all, we have our own taxiway that runs from the airport to the plant.”

AOPA Pilot Editor at Large
AOPA Pilot Editor at Large Tom Horne has worked at AOPA since the early 1980s. He began flying in 1975 and has an airline transport pilot and flight instructor certificates. He’s flown everything from ultralights to Gulfstreams and ferried numerous piston airplanes across the Atlantic.
Go to Thomas A. Horne's Profile
Topics: Aviation Industry, Overhaul, Ownership