Get the app Get the app
Already a member? Please login below for an enhanced experience. Not a member? Join today
News & Media An unforgettable hour 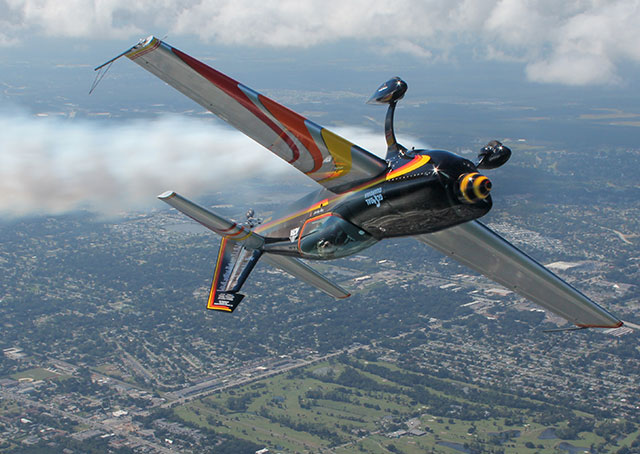 Patty Wagstaff has plenty to teach a pilot about precision, discipline, and the fine points of stick-and-rudder flying. The three-time U.S. National Aerobatic Champion, National Aviation Hall of Fame inductee, and longtime fixture on the airshow circuit can push an aerobatic airplane to its limits, but a lesson from Wagstaff is carefully tailored to the individual needs (and G force tolerance) of her student.

In May 2014, I had the privilege of sharing a cockpit with this aviation legend, and sharpening up a set of maneuvers, including the frustratingly elusive slow roll, was just one of the benefits. Practicing the International Aerobatic Club 2014 Sportsman sequence—a competition routine of 10 maneuvers including the hammerhead, spin, Immelmann, and slow roll—was educational, and a ton of fun. Wagstaff, sensing my fatigue about halfway through the lesson, offered a scenic break in the action, flying low and not-so-slow over the St. Johns River to check out local wildlife from a perspective Wagstaff and few others could safely provide, before heading up to altitude to practice a few more rolls.

Wagstaff is supporting the AOPA Foundation mission by putting a unique opportunity to learn the fine points of recovery from unusual attitudes up for bids in the foundation’s online auction: an upset recovery training session in an Extra 300L, followed by a debrief and a meal at one of the fine restaurants in St. Augustine, Florida, where Wagstaff operates her school (right next to Southeast Aero, where Extra aircraft are imported to the United States).

“Our members really look forward to the surprises we offer through our online auction every year. We are thrilled that Patty Wagstaff is participating in this year’s auction. Imagine how much fun it will be for the winning bidder to fly along with her,” said Stephanie Kenyon, vice president of the AOPA Foundation. “And of course, the funds raised go to support the Air Safety Institute, as well as our efforts to encourage more people to fly and protect community airports nationwide.”

Wagstaff, who is also an AOPA ambassador, said the upset recovery curriculum—like the aerobatic programs she also teaches—can be as extreme as a pilot might want, or not.

“Most people want to do a loop and a roll at least, and then, as you know we can always chase alligators and then down the beach looking for whales and dolphins,” said Wagstaff, who has a soft spot for wildlife, and has traveled to Kenya frequently in recent years to train Kenya Wildlife Service pilots for their fight against poachers.

Count on Wagstaff to sharpen your skills—my slow roll was much improved, with much credit to Wagstaff, who demonstrated and coached me to slow it down, focus on making smooth rudder transitions, and use plenty of top rudder on the way around.

The winning bidder can look forward to a great learning experience, and an hour with Wagstaff will go a long way toward taking the “unusual” out of “unusual attitudes.”