Inspired to serve others 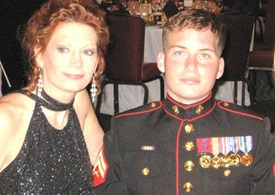 Linwood Nooe’s good work is getting a little out of hand.

What began as a simple flight to give a U.S. Marine recovering from catastrophic injuries a taste of the freedom of flight has evolved into an effort to make aircraft more accessible to people with disabilities across the country and beyond.

Nooe, a Mississippi pilot and businessman, returned to the cockpit about five years ago after a battle with a life-threatening illness reminded him that life is too short to postpone the joy of flying. Not long after, he decided to share that joy with a friend of his son, a U.S. Marine aviation mechanic who had suffered devastating injuries in 2010 after falling 30 feet onto concrete. Cpl. Michael Andrew “Dru” Raley, still recovering from injuries that confined him to a wheelchair, went for a ride in Nooe’s Citabria in 2012 that led to much more.

“I showed him how to fly … I told him he really didn’t need the rudder,” Nooe recalled. “He was so lit up and he was in such a good mood when we landed.” 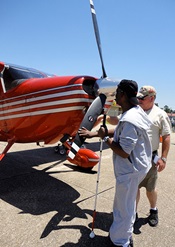 “At the end of the day, we weren’t people with and without disabilities, we were just people enjoying aviation,” Nooe recalled. “There were lots of unintended consequences.”

Nooe has created a registered nonprofit organization, Operation PROP—which stands for People Reaching Outrageous Potential—and he wants to establish self-sustaining events at other airports. In May, Operation PROP drew more than 150 people to Stennis International Airport on the Mississippi Gulf Coast, and Nooe plans another event at Stennis in 2015. He said the volunteers who have stepped up to fly, help passengers board, or keep things organized have developed a routine that works, and he’d like to eventually turn the Stennis event over to the local community to continue in years to come, and move on to create another, propagating flying day events at as many airports as he can reach.

Nooe said these events have drawn positive coverage in local media, telling an important side of the general aviation story: that pilots are willing to step up and help others, and airplanes can change lives.

He has not stopped there. The events put Nooe in contact with certificated and aspiring pilots who have been held back by a lack of certified aircraft equipped with hand controls, and Nooe set to work once again, searching for options. 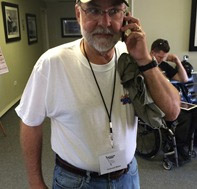 “I looked at it from a standpoint, what if it was me?” Nooe said. “You just got to get on the Internet and call and call and call … that’s what I’ve done. If you find anybody anywhere that’s got anything to do with hand controls, I’ve talked to them.”

Nooe’s search led him to Kentucky, where he tracked down the inventor of Union Aviation hand controls, an apparatus that connects rudder pedals to a metal bar that can be moved by hand. Those controls, compatible with a range of Cessna and Grumman singles, have been out of production for a few years.

“After about a year of me calling them, (James Shockley Jr. patented the controls in 1975) they agreed to sell me the STCs,” Nooe said, referring to the supplemental type certificates for installation of the controls in various aircraft.

Getting those hand controls back into production will take some more doing, however. Nooe said the product liability insurance is going to cost upward of $20,000 per year; when last on the market, a set of Union controls sold for $2,000, and only about 20 or 30 sets were sold in a year.

“It’s not a for-profit proposition at all,” Nooe said. He has compiled a list of about 15 people who are hoping Nooe can help them gain access to the hand controls, and that is where Travis Riley and Davis Aviation enter the picture. 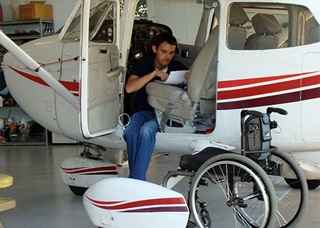 Riley was on the cusp of graduating from Hinds Community College in April 2011, one of several schools he attended in pursuit of an aviation career. Tight finances forced him to leave three other schools, but his A&P certificate was at last in reach when he was struck by a pickup while riding his motorcycle on the interstate. The crash broke his spine in several places, requiring surgeries and a lengthy hospital stay. He proved the doctors wrong—they had predicted he would never regain use of his left arm. Riley graduated at last in 2012. Davis Aviation, which is based in Brandon, Mississippi, and specializes in aircraft parts reclamation, hired Riley to travel the world on recovery missions. Riley said he is grateful to Davis Aviation for giving him a chance to succeed, disability notwithstanding, and to Nooe for helping rekindle his own dream of learning to fly.

“It’s an incredible place to work. They have really helped me get back on my feet,” Riley said of his employers. He means that literally—he is now able to walk short distances with a walker, and continues to work on walking farther.

“It’s just your legs, man,” Riley said of his injuries. “You can learn to adapt and move on. Life goes on. I’m still alive.”

Nooe provided a photo of Riley’s first official act as an A&P mechanic: installing a set of Union hand controls in a Cessna owned by a local flying club. Riley and the rest of the Davis Aviation team are working with Nooe to prepare an application to the FAA for parts manufacturer approval (PMA) to return the Union controls to production. Riley said he is particularly motivated by a desire to help veterans who have been wounded or injured serving their country.

“That’s a very small thing that I can do for them,” Riley said.

One of the veterans Riley and Nooe hope to help is U.S. Marine Lt. Andrew Kinard, who lost his legs to an improvised explosive device in Iraq and became the first Able Flight trainee whose scholarship was provided through the AOPA Foundation. (Kinard details his story in a video available on the Able Flight website.)

Kinard, who was honored at AOPA Aviation Summit in 2013, is now on Nooe’s list, one of those pilots and aspiring pilots who want to fly certified aircraft. Able Flight Executive Director Charles Stites said renewed manufacture of hand controls would be a boon.

“As time has gone on, people have found it more difficult to find these,” Stites said. Able Flight remains focused on training sport pilots in light sport aircraft, and there are a variety of models in current production with hand controls. Nooe pointed out that a new or late model light sport aircraft remains too costly for many, compared to the option of finding an older certified aircraft and installing hand controls.

“I get a call once a month from people looking for hand controls,” Stites said. If Nooe is successful, “that will be a real value for quite a few people who want them.”

Nooe said Stites is among many in the aviation community who have offered to lend a hand, though he will need more support and funding. Establishing a 501(c)3 nonprofit is no easy task, though Nooe has gotten that far.

“I’m such a little guy in such a big sea,” said Nooe. “We definitely need to be doing some fundraising … I’m just not organized enough.”

Nooe recently got another pair of hands to help: Raley’s mother, Elizabeth, has stepped up to pitch in.

Nooe hopes the injured Marine who started it all will eventually decide to learn to fly.

“This whole mess is his fault,” Nooe said with a laugh.

For now, he is working the phone, writing emails, and spreading the word anywhere he can. Chance encounters have drawn interest from new people, he said, including some celebrities who may eventually join his effort. He is also talking to fellow pilots, working to secure aircraft that can be fitted with hand controls for training. He has a visitor coming from Canada next month to train, because there is no flight school in Canada equipped with hand controls. He hopes to one day build a new home so his hangar apartment can be used to host visitors in town for that training.

He is taking it one step at a time, willing to risk making a pest of himself for the cause.