Get the app Get the app
Already a member? Please login below for an enhanced experience. Not a member? Join today
News & Media Bizjet tests laser turret 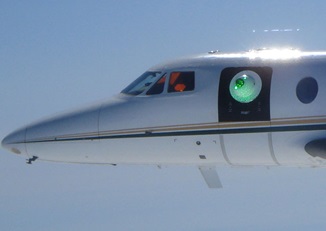 A business jet once owned by a Philadelphia-area businessman is now being used to test military laser weapon systems, a distinction that is surely unusual among general aviation aircraft.

The University of Notre Dame has been operating the Falcon 10 donated by Matthew McDevitt in collaboration with Lockheed Martin and the Air Force Research Laboratory, flying a Lockheed-designed turret mounted in what used to be the aircraft’s door. Crews now enter through an over-wing portal on the opposite side, among various modifications needed to turn the 20th Century corporate jet into a test bed for 21st Century weapons.

The university posted a YouTube video (below) showing the dramatically redesigned interior. The Aero-adaptive Aero-optic Beam Control turret is designed to “counteract the effects of turbulence caused by the protrusion of a turret from an aircraft’s fuselage,” Lockheed reported in a recent press release. (In other words, “hold it steady.”)

Laser weapons are making their way from science fiction to reality by land and sea, and Notre Dame has long been involved in the research required to solve problems unique to using lasers in flight—the effect of turbulence being a critical problem to solve.

“Planes have difficulty using lasers because even a tiny amount of turbulence can effectively turn a laser into a really expensive flashlight,” said Eric Jumper, Notre Dame professor of aerospace and mechanical engineering, in an article on the university website. “We have developed aero-optic wave front beam-control architectures that overcome aircraft vibration and mitigate the effects of turbulence, which could enable such technologies as free-space communication.”

That’s right, not only can the laser beam blast enemies from the sky, it also has potential to stream Netflix to high-flying (friendly) aircraft at blazing speed.