Get the app Get the app
Already a member? Please login below for an enhanced experience. Not a member? Join today
News & Videos Debrief: Checkride angst

What does a private pilot applicant have in common with a 9,000-hour airline 777 captain upgrade candidate? 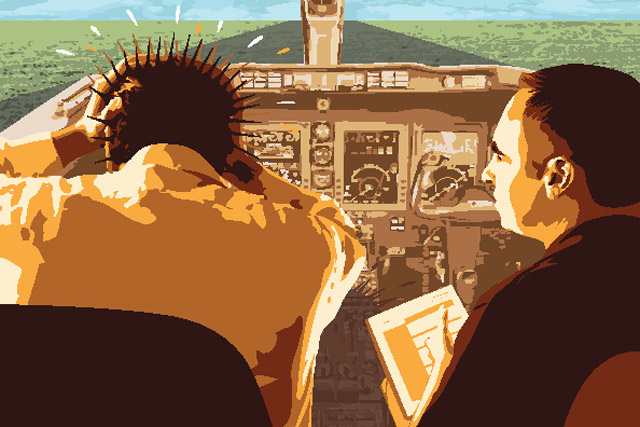 What does a private pilot applicant have in common with a 9,000-hour airline 777 captain upgrade candidate? They are both expected to prove themselves in a practical test environment, for one thing. The other commonality is fear of checkride failure.

As a professional pilot and FAA designated pilot examiner (DPE) who has been on the receiving and giving ends of practical tests, I have experienced the nervousness of applicants. The long honored tradition of FAA practical tests has lead to sleepless nights, upset stomachs, and carpet worn bare from relentless pacing. You might think this is natural for the neophyte pilot, but what about this highly experienced wide-body commander to be?

Let’s take our private pilot for example. He has put many hours and dollars into the preparation for this endeavor. He also likely has his ego at risk with friends and relatives and the possible dashing of a lifelong dream if the ride ends with a notice of disapproval. A recent private pilot applicant arrived to the practical test feeling frazzled with a serious case of nerves admitting that his Facebook friends were standing by for news of his checkride results. He managed to score well on the oral portion but somehow managed to attempt a landing on the displaced threshold during his short-field landing demonstration. He attributed it to nervousness and asked for another try. Unfortunately the FAA does not allow a second attempt at an unsatisfactory task.

The next day, after additional training, and with mounting pressure, this gentleman nailed the task successfully and was awarded his hard-earned private pilot certificate, and many thumbs up on Facebook. Another time, a multiengine candidate had a meltdown mid-checkride and promptly transferred the flight controls to me. He stated he needed to compose himself before his one-engine inoperative demonstration and proceeded to close his eyes and take deep breaths for well more than a minute. Then there was the commercial pilot applicant stopping in the middle of the oral exam to pray and ask for wisdom, prayer book in hand. There were other examples of this behavior I simply attributed to performance anxiety.

In an effort to minimize potential anxiety-related mistakes, we examiners are schooled in creating a relaxed environment and are expected to make the checkride experience as pleasant as possible for the applicant. Unfortunately the real nerves happen in the days and hours leading to the event. How can we lessen this case of nerves in the first place?

My advice is to talk to other applicants who have been there, particularly with the examiner you plan to get, and ask about their examining style. Prepping for rote questioning is discouraged because DPEs are required to present and rotate questions in a scenario-based manner while following the practical test standards. Also, ask your CFI to be honest in evaluating your performance in the final training days. Many applicants are left undertrained for the big day and feeling anxious.

Our private pilot examples had high stakes to lose, but nothing like the 777 upgrade candidate holds. This future captain has the potential to lose his livelihood with the same unsatisfactory performance.

I recall my initial operating experience line evaluation flight with the company check airman to qualify as an air carrier flight crewmember. Not long after airline indoctrination and simulator training, and a handful of supervised flights, I was expected to handle the flying duties and make critical aeronautical decisions during a Part 121 international flight with passengers. I managed to overcome the pressure imposed that day and thankfully scored highly in my evaluator’s opinion and was cut loose on the flying public.

I now find the best calming technique is to ask applicants if they are nervous when they arrive. They invariably say yes, very nervous. I then tell them that I too was nervous many times—as is the 777 captain upgrade candidate taking his practical test down the street at Miami International Airport. You, my friend, are about to join a very exclusive club. No pressure!

Jack Boyd is a 10,000-hour DPE and instructor pilot and is president of Gold Standard Aviation.