Get the app Get the app
Already a member? Please login below for an enhanced experience. Not a member? Join today
News & Media Airport stories: It’s a good day

Any day at the Alexandria, Indiana, airport is a good day for members of the Central Indiana Soaring Society. 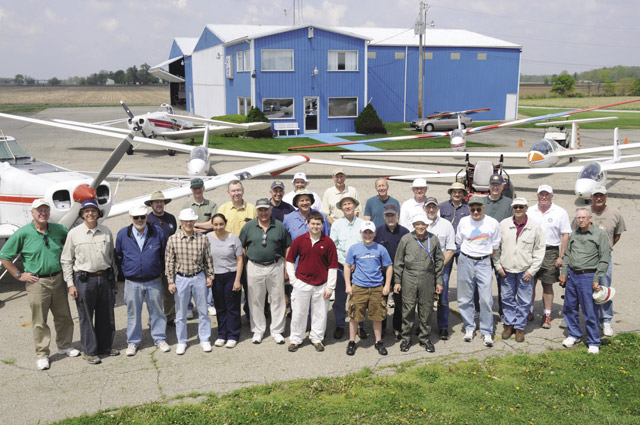 Any day at the Alexandria, Indiana, airport is a good day for members of the Central Indiana Soaring Society. They haven’t always had carefree time to lounge around the clubhouse, eating doughnuts and drinking coffee, and enjoying the airport.

Based at Indianapolis Executive Airport for about 40 years, the club’s glider operations became incompatible with other operations at the field. They moved to Alexandria in 2004 where Duane Knotts, an avid pilot, welcomed them to his privately owned, public-use airport. Knotts rented a hangar to the club until 2007 when he said he needed to sell the airport because he was getting older.

Nearby farmers reportedly were interested in purchasing the land, but Knotts wanted the airport to survive—he had built it on a cornfield at the family farm. “He said many times to us, ‘You are going to keep it as an airport,’” recalled George Saunders, president of the nonprofit club at the time of purchase. The land needed to be rezoned from a farm to an airport. The group raised money, used $100,000 from reserves, and secured a $200,000 loan to buy the airport and some additional land from another farmer for $375,000 in 2008. The club recently refinanced and is scheduled to pay off the loan in nine years.

Saunders credits the 54-year-old club’s “good financial history” and forethought for being able to buy and maintain the public-use airport. Ten to 12 gliders are usually based at the airport and pay rent to the club, and $4 of every tow fee goes into the runway fund.

While ensuring the club’s financial security, members also have made sure the dues remain affordable. One way they do that is by requiring members, now about 65, to donate their time, AOPA Airport Support Network volunteer Mike Nichols said—whether offering free flight instruction, taking turns flying the towplane, being crew chief, or helping with aircraft and airport maintenance.

Fees and sweat equity in the facilities are a small price for a day at the airport to savor soaring.

Full membership in the club costs $1,000, which is payable in one $500 installment to join and then two $250 installments over the following two years, and is good for the entire family (spouse and children under 21). Monthly dues are $48. Student memberships are steeply discounted so they can earn a certificate for $3,000. (Soaring Society of America membership is extra.) Flight instruction is offered by club members for free, and tow rates range from $16 to $50. Members can rent either of the club’s two Blanik L–23s, a Grob 103, or a Schweizer 1–34. (The club also owns two Piper Pawnees.)

View the video from AOPA Live This Week.

Growing the sport of gliders

The Tucson Soaring Club, formed in November 1967 at Ryan Field with 25 charter members, was created to promote the sport and training of the next generation of glider pilots.

The club has 10 aircraft, including three two-place Grob 103s and a two-place PW6, four single-place airplanes, (two Schempp-Hirth Standard Cirruses, a Politechnika Warszawska PW5 and a Schweizer SGS 1-34), and two Pawnee towplanes. “We also have a dozen private owners,” said Ron Olson, who handles flight operations for the club.

Club aircraft are available to members at no additional cost, and tows cost $1.20 per 100 feet plus a $2 fuel surcharge. “Our youngest guy was an Air Force cadet, and it goes up to guys in their 70s and everything in between,” Olson said.

The club stays active in the Tucson community, with a yearly aviation camp for Boy Scouts and flights for the disabled. “We have one glider with a hand control, so we’ve done events with the Wounded Warriors,” he said.

Olson advises those wanting to start a club to research and see how other clubs have succeeded, and failed. “The Soaring Society of America has all kinds of people to help direct new clubs,” he said. “You also need to encourage young people by taking a ride with a friend or club member. Share the sport.”