1. Popular film actor Steve McQueen (1930-1980) loved flying, and his last airplane was a Boeing/Stearman PT-17 bearing registration number N3188. What was special about the number 3188? 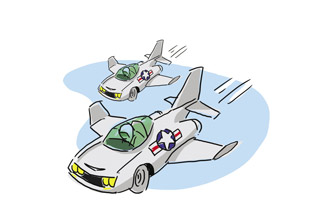 1. Popular film actor Steve McQueen (1930-1980) loved flying, and his last airplane was a Boeing/Stearman PT-17 bearing registration number N3188. What was special about the number 3188?

3. From reader Rick Cohen: A Boeing B-29 Superfortress called the Enola Gay and commanded by Col. Paul Tibbets dropped an atomic bomb (called Little Boy) on Hiroshima, Japan, on August 6, 1945. Fill in the blanks regarding delivery of the second atomic bomb:

4. Almost every pilot knows that the Spirit of St. Louis was a Ryan monoplane, but what was the airplane’s model designation?

5. What airplane not designed or built by Ford was affectionately called a Ford?

6. The only four instruments required on a hot-air balloon are an altimeter, a vertical-speed indicator, a fuel gauge, and a _______.

7. From reader John Schmidt: Approximately when was the first military attack made using drones?

8. A pilot maintains a true heading of 045 degrees while flying over the United States in no-wind conditions. The resultant track is a

1. 3188 was McQueen’s reform school number while at the California Junior Boy’s Republic, a reformatory near Chino, California.

2. The airplane would bank left. This is called the Magnus effect and is the same phenomenon that explains the behavior of a pitched and spinning baseball.

3. The second Boeing B-29 was commanded by Maj. Charles Sweeney and was called Bockscar. The second atomic bomb was called Fat Man and was dropped on Nagasaki on August 9, 1945 (three days after Hiroshima).

4. The airplane, N-X-211, was officially designated as a Ryan NYP. The letters stood for New York and Paris.

5. The Douglas F4D Skyray, the first Navy and Marine fighter that could exceed Mach 1.0 in level flight. (It would be difficult not to call it a Ford.)

6. A pyrometer, which measures the temperature of the hot air at the top of the balloon.

7. In 1849, Austria launched balloons carrying explosives from a ship, Vulcano, in the Adriatic Sea. The balloons were to drift over Venice, Italy, but Venetians cheered when many of the balloons exploded prematurely.