In celebration of AOPA’s seventy-fifth year, the association is giving away 75 additional prizes in the AOPA Debonair Sweepstakes. Winners are being notified by mail and will be able to choose from a range of prizes that include everything from an AOPA computer backpack for eighth prize to an AOPA Jay flight simulator by Redbird or Garmin aera 796 with XM for first prize.

Ever wonder what goes in to identifying the sweepstakes winner? Check out answers to these frequently asked questions and find out how Lagergren was selected as the winner.

All 19 aircraft AOPA has given away in the current 21-year series are still flying and have scattered to 15 states. AOPA Pilot Senior Editor Alton K. Marsh tracked them down and gives an update on where the aircraft are now.

What's in store for the 2015 AOPA Sweepstakes? AOPA will be giving away a Reimagined Cessna 152—who knows, it could be your new airplane. 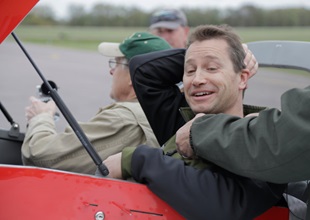 The AOPA Sweepstakes Debonair was awarded Oct. 5 to Steve Lagergren of rural Litchfield, Minnesota, after an elaborate ruse in which the much sought-after and highly customized airplane was delivered to him in the sky near his home airport.

Lagergren, who built his own RV-7 kit airplane, was flying it on Sunday when he met up with the Debonair over southeastern Minnesota. AOPA President Mark Baker and Editor at Large Tom Horne were at the controls of the Debonair. When Lagergren recognized the Bahama-blue Debonair flying nearby, Baker informed him via the aircraft radio that he was the lucky winner of the newly restored four-seat airplane.

"I'm Mark Baker from AOPA and I'm here to present you with your new airplane," he said on the multicom frequency, 122.9 MHz.

"Yeah, that's a good one," Lagergren replied, dismissing the statement as a joke. 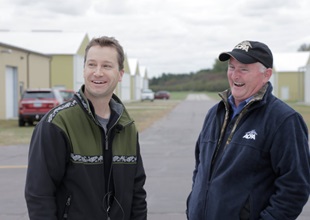 There was a long pause before Lagergren keyed the microphone again.

"Unbelievable—I love that airplane!" he said as reality sunk in. I've got to calm down a little bit to land. Oh my gosh."

The Lagergren family—wife Dawn and daughters Nora, 12, and Holly, 10—was listening to the exchange on the radio base station at the Litchfield airport, and the girls giggled as they heard their dad figure out the secret they had learned that morning. (Baker had called Dawn Lagergren at 9:35 a.m. to tell her the good news and invite her and her daughters to be at the airport when the airplane was awarded. They also brought about a dozen friends to see the handover.)

"It was a total surprise," said Lagergren, 43. "There were a few things going on that seemed unusual in retrospect, but I never suspected this." 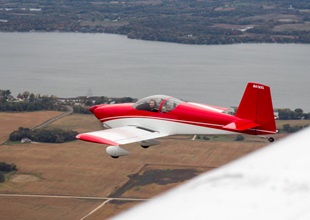 AOPA enlisted Bob Collins, a fellow RV-7 builder and pilot, who works as a writer for Minnesota Public Radio in the Twin Cities, to help pull off the ruse.

"I told him I'm part of a group of RV pilots and we like to fly around on the weekends and drop in on others builders who may be doing interesting things—and that's pretty much true," Collins said. "None of us knew Steve, but we told him we threw a dart at a Minnesota map and it happened to land on Litchfield, and we wanted to drop in there and hoped he might show us around.”

Lagergren immediately agreed and suggested a local fly-out to Winstead, a nearby grass strip known for skydiving and grassroots aviation. Collins and several other RV pilots flew their airplanes to Litchfield and met Lagergren, and then they all flew to Winstead. While they were there, Baker and Horne flew the Debonair to the area so that they could be in position when Lagergren took off in his RV-7. The Debonair is Automatic Dependent Surveillance-Broadcst (ADS-B) equipped and quickly identified Lagergren's airplane and called Collins (who was riding as a passenger in Lagergren's right seat).

Baker asked Lagergren if he could join the RV-7 and follow him back to Litchfield. When they were in visual contact, Collins asked Lagergren whether he recognized the distinctive Debonair from the July cover of AOPA Pilot magazine and showed him a copy he brought along with him.

Collins had been coordinating and refining the plan with AOPA staff for several weeks in advance.

"It was a complicated plan, but it went about as well as it could possibly go," Collins said. "It all went beautifully."

The sweepstakes Debonair—a 1963 Beechcraft model 35-B33—was discovered at Brainard Airport in Hartford, Connecticut, where it had been languishing in its tiedown space for years. After AOPA selected it as a sweepstakes airplane, a massive, two-year restoration effort began. (See a list of the generous sweepstakes contributors.) Virtually every component of the original airplane has been refurbished, as detailed in the July 2014 AOPA Pilot feature, “Debonair on deck.” The one-of-a-kind aircraft, recently professionally appraised, is valued at some $150,000.

D’Shannon Aviation provided a new “speed slope” windshield and side windows, flap and aileron gap seals, and installed 20-gallon wingtip fuel tanks. Santa Fe Aero Services ripped out the funky old instrument panel, replaced it with a new one of their design, and then filled it with a complete selection of the most modern retrofit avionics. These include Aspen’ three-screen Evolution primary and multifunction displays, Garmin’s new GTN 750/650 touchscreen GPS nav/coms, Electronics 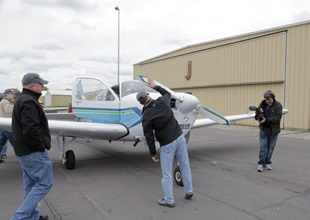 International’s MVP-50P engine and systems analyzer, and Garmin’s GDL 88 datalink transceiver, which gives the Debonair full ADS-B capability. As if that weren’t enough, Garmin’s GDL 393D glareshield-mounted ADS-B-In receiver puts a moving-map display front and center on an iPad Mini. The iPad Mini also shows electronic charts and much more. It all adds up to a whopping total of six display screens—and maximum information redundancy. That includes weather information: the GTN 750 shows FIS-B weather and TIS-B traffic, and XM WX’s datalink weather plays on the Aspen multifunction displays. And that’s just a partial list of the Debonair’s avionics. The sweepstakes grand prize also includes a set of Lightspeed Zulu headsets and a host of additional accessories.

The original, 225-horsepower IO-470-K engine has received a major overhaul and conversion to IO-470-N status courtesy of Genesis Engines by D’Shannon, which included an upgrade to 260 hp. American Propeller overhauled the prop, Air Mod yanked out the old interior and replaced it with a custom design featuring leather seats and air bags, and KD Aviation blasted off the old paint and gave it a new paint scheme designed by Scheme Designers. The new paint scheme retains some design elements of the stock 1963 paint job, yet has a fresh new look that promises to stay in style for years to come. 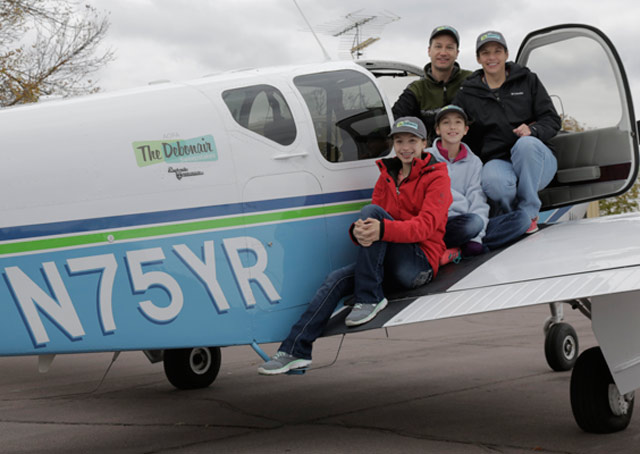