Get the app Get the app
News & Media Training Tip: Pressure check 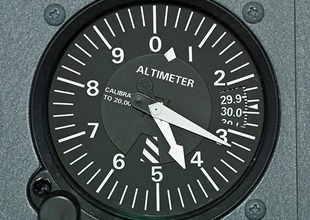 A student pilot on a solo cross-country lands at an unattended airport at 1,400 feet msl. After refueling at the self-service pumps and taking a lunch break, she prepares to depart on the return leg.

Coming to the item "Flight instruments – SET" on the pre-takeoff checklist, she gives the altimeter a glance to verify that it still indicates the field elevation—the proper benchmark for setting the instrument absent a local  altimeter setting.

The return flight will take about 90 minutes at the selected altitude. When within about 25 miles of the home airport, she will monitor the automated terminal information service broadcast, then contact approach control. Between now and then it would be possible to fly the route squawking 1200, and without being in radio communications with an air traffic control facility—a relaxing change of pace from flights into more hectic airspace.

But are there still reasons to keep an ear to air traffic frequencies?

Now that the student pilot is gaining experience, division of her attention between piloting requirements is getting easier. Having passed the point where she only has enough attention to spare for radio transmissions addressed to her own N-number, the trainee appreciates the importance to her situational awareness of monitoring transmissions between ATC and other aircraft.

One item frequently included in such transmissions is the ATC facility’s altimeter setting. It is also available from METAR broadcasts at airports with automated weather reporting systems along the route.

The student’s instructor recently noted that an example of her increasing ability to juggle tasks was her now-automatic response to altimeter settings broadcast by ATC. Doing so enhances safety: "Once in flight, it is important to frequently obtain current altimeter settings en route to ensure terrain and obstruction clearance," notes Chapter 7 of the Pilot’s Handbook of Aeronautical Knowledge.

Ignoring altimeter settings is at its most hazardous when an aircraft is flown toward an area of lower pressure. Could you explain why to the designated examiner on your checkride?

"If an aircraft is flown from a high pressure area to a low pressure area without adjusting the altimeter, a constant altitude will be displayed, but the actual height of the aircraft above the ground would be lower than the indicated altitude," explains the chapter.