Welcome to our world 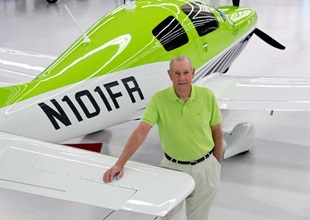 If more residents of 49 state capitals are thinking about general aviation and appreciating their own GA airports, credit pilots Field Morey and Conrad Teitell.

On Sept. 29, the pair completed the Capital Air Tour, a two-week mission they devised to fly to each state capital except the one out there in the Pacific beyond the range of their single-engine airplane. The two pilots introduced general aviation to local news media at the end of each day’s flying, opened their aircraft, a 2013 glass-cockpit Cessna Corvalis TTx for examination, and talked about why your local airport is a valuable asset.

Along the way it was possible to track the tour on Morey’s website, making the trip available as a teaching tool for several elementary school teachers interested in using it to educate "about geography, time, distance and the U.S. capitals," said the news release announcing the trip’s completion. And if any particular facet of the journey inspired a youngster to start down an aviation career path, well, that would suit Morey and Teitell just fine.

As AOPA reported on Sept. 3, a seed was planted for the tour when Teitell, 81, a Greenwich, Connecticut, attorney, decided he would like to fly to every state, and Morey, 75, a flight instructor from Medford, Oregon, dreamed up a plan to  fly to every state capital in two weeks. They  launched from Salem, Oregon, planning to make brief stops at several capitals each day, adjusting the route as necessary for weather.

"We were very pleased to see the local media come out to the airport at the end of every day so we could introduce them to our world and tell them about the benefits of having a GA airport in their city," Morey said, adding that the tour afforded opportunities to "show the media what a modern private airplane filled with high tech looks like."

When the tour arrived at Hawkins Field in Jackson, Mississippi—state capital number 36—the Clarion-Ledger newspaper was waiting. It posted a video interview of the flight crew, largely shot against the backdrop of the gleaming Corvalis, its gull-wing doors open wide on a sunny afternoon.

Faced a decision whether to push onward to Austin, Texas, with weather lurking off the Gulf Coast, or dine out on catfish with Sam Everett, a local friend of Morey’s, the choice was easy: dinner.

The last leg of the trip concluded with a landing at Morey’s home base, Rogue Valley International-Medford Airport in Medford, Oregon, where a water salute from the airport’s fire trucks paid tribute to a flight well flown.

Some weariness might be expected after two weeks of long days flying to unfamiliar airports, and so many aerial sightings of State House domes, but that wasn’t the mood in the Corvalis’s cockpit at flight’s end, said Morey in the announcement of the flight’s completion.

"As soon as we landed today, my partner, Conrad, said he had so much fun, we should turn around and fly the whole thing again in reverse," Morey said.

Dan Namowitz has been writing for AOPA in a variety of capacities since 1991. He has been a flight instructor since 1990 and is a 35-year AOPA member.
Go to Dan Namowitz's Profile
Topics: U.S. Travel, Travel, Aircraft