Get the app Get the app
AOPA will be closed July 4th, in observance of the Independence Day holiday. We will reopen at 8:30 am ET on Tuesday, July 5.
News & Media Louisiana range needs more airspace

A Federal Register notice published in September details the proposed changes to three adjacent restricted areas (one of which, R-3804C, replicates the lateral boundaries of R-3804A at higher altitude) required to accommodate live fire training conducted as soldiers prepare for deployment. R-3804B, located adjacent to R-3804A, would be expanded laterally to the north to match the northern edge of R-3804A; the vertical limit would increase from 3,000 feet msl to 10,000 feet msl. The adjacent R-3804A already extends upward to FL 180.

The Joint Readiness Training Center at Fort Polk is one of two such  the Army has available “for conducting realistic force on force exercises,” according to the notice of proposed rulemaking. The proposed restricted complex would not extend beyond Army-owned land, and the restricted complex is within a larger military operations area that extends to FL 180.

The Army expects to use the associated firing range continuously for two weeks every month, and the proposed rulemaking includes changes to the descriptions of the restricted areas, including notation that R-3804B will be activated by notam, rather than in continuous use. The airspace would be opened to aviation traffic when the firing range is not in use.

AOPA is reviewing the proposed changes, and will submit comment by the Nov. 10 deadline. Members are encouraged to do the same, and send AOPA a copy of comments submitted. 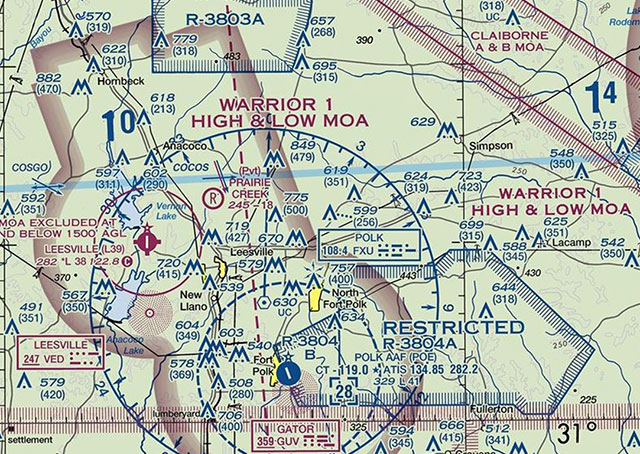