Winds gusting past 30 knots toppled pylons and made for some very tricky flying, with world-class pilots struggling to stay on course as the Red Bull Air Race World Championship visited Las Vegas for the penultimate event of the season.

The Oct. 12 final rounds were cut short, leaving Canada’s Pete McLeod atop the podium based on his top qualifying time, with Britain’s Nigel Lamb taking the season series lead with 53 points, five points ahead of Austria’s Hannes Arch and six in front of fellow Brit Paul Bonhomme heading to the final event in Austria Oct. 25 and 26. Lamb leads the series for the first time in his illustrious racing career, but cannot rest easy in Spielberg, with Arch and Bonhomme both within striking distance. 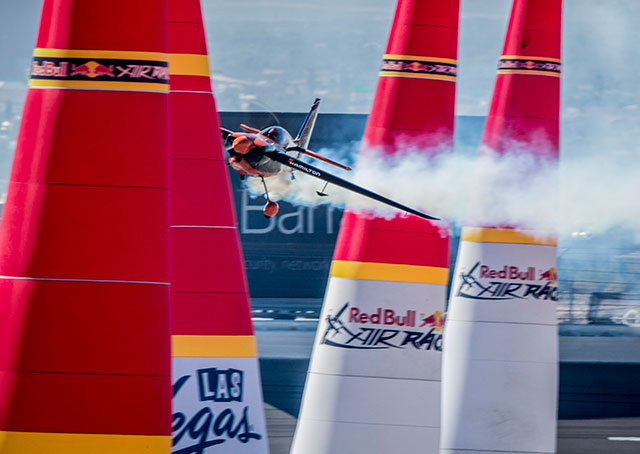 The the racing action Oct. 12 was halted after 11 of the 12 pilots completed the first round of the final day, but only just—there were plenty of mistakes and penalties to go around. Lamb and Arch would both have failed to advance out of that first round, had the race continued, and picked up points they would otherwise not have earned based on the qualification results. McLeod, meanwhile, said in a Red Bull news release that he would just as soon have finished the race as planned.

“I’m happy with my flying in Qualifying so it’s something to smile about,” said McLeod, who has been the top qualifier in four of the seven races held so far this year, though he has never finished higher than third place prior to the wind-shortened event in Las Vegas. “I still want to earn my first win in the Final Four.”

Earlier in the week, Kirby Chambliss—one of two American pilots flying in the series this year—gave music producer and Las Vegas performer Steve Aoki a high-energy ride to celebrate the release of Aoki’s new album, recording the flight in the video displayed below.