Weather briefings for the Internet age

When you go flying, what are the requirements to obtain preflight weather, airport, and notam information? It might seem like a straightforward question, but in practice it’s a bit more complicated.

Let’s start with FAR 91.103, which requires pilots to become familiar with “all available” information regarding the flight. That’s reasonable enough, but where should we go to find aviation-specific information about the weather? The short answer is through the FAA Direct User Access Terminal (DUAT) system or a flight service station, although this raises a question: What if you receive weather information via a third-party provider or a website that offers aviation weather? Even though you complied with the federal aviation regulations, there may be no record of you having obtained a weather brief prior to going flying.

Therein lies the rub. In recent months, AOPA’s Air Safety Institute has analyzed an increasing number of National Transportation Safety Board (NTSB) aviation accidents where the NTSB was unable to determine whether the pilot obtained a weather briefing for the flight. The language reads similar to this: “Direct User Access Terminal system records show the pilot filed an IFR flight plan with the FAA. However, there was no record that the pilot obtained a weather briefing from DUATS, or from flight service. According to the pilot's wife, the pilot typically obtained preflight weather information from aviationweather.gov, but that web site does not retain records of user access. The investigation was unable to determine whether or how the pilot obtained weather information regarding his planned flight.” 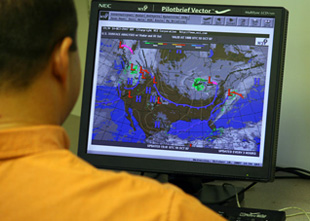 The Internet gives pilots access to the exact same information that they would receive from flight service or FAA DUAT system. For example, aviationweather.gov (a recommended weather source in the FAA’s Aviation Weather Services Advisory Circular 00-45) is a fantastic resource for pilots to get weather information—in particular, its Java tools for icing and turbulence are very helpful to paint a clear weather picture. But, like so many other sites that provide excellent weather and flight planning tools, it unfortunately does not retain records of user access.

Also, many of the widely used flight planning applications obtain FAA DUAT weather and display it within their application. However unless one is logged in to a pilot’s individual DTC DUAT or CSC DUATS account via a third-party’s flight planner, there will be no record of that pilot having received FAA DUAT weather. Almost all of these tools and applications include a disclaimer saying pilots should contact “official sources” for the most accurate and timely updates.

But wait, general aviation does not have an “official source” requirement like the airlines, which have to get a list of sources approved and published in their flight operations specifications. So where does this leave us?

As mentioned earlier, if you are flying under FAR Part 91, there is really only one regulation that you need to comply with regarding weather briefings—FAR 91.103. It requires each pilot in command to become familiar with all available information concerning that flight to include weather reports and forecasts if the flight is being operated under IFR or for a flight “not in the vicinity of an airport.” FAR 91.103 is that catch-all for “all available information.”

The point is this: If your weather briefing (including notams) isn’t recorded or “provable,” it’s difficult to defend yourself if, let’s say, you busted a temporary flight restriction (TFR) or didn’t comply with a notam that had been issued affecting your route of flight.

Here are some general rules of thumb to keep in mind:

Ultimately, the choice is up to you. But, if you want to be on record having been “familiar with all available information concerning the flight,” get a weather briefing (including notams) that logs the event—even if the weather is CAVU and you’re just planning your favorite hamburger hop.