Get the app Get the app
Already a member? Please login below for an enhanced experience. Not a member? Join today
News & Media Hypoxia: Insidious emergency

Many in-flight emergencies arrive with fanfare: annunciator lights, engine sputtering, smoke. Hypoxia may insinuate itself into the cockpit quietly, without the pilot even knowing. In its subtlety lies danger.

Hypoxia, a deficiency of oxygen reaching the tissues of the body, can lead to muscular impairment, impaired judgment, and loss of consciousness. After two recent accidents involving pilot incapacitation at high altitude led to speculation that hypoxia may have been a factor, Dr. Gregory Pinnell of Airdocs invited a group of AOPA staff to Western Michigan College of Aviation at Battle Creek Kellogg Airport for a lesson on recognizing and avoiding this insidious condition.

The air up there

Symptoms of hypoxia vary, so learning one’s own personal reaction can arm a pilot to react to oxygen deprivation before it’s too late. To learn our symptoms, we concluded the afternoon in a normobaric altitude chamber set to altitudes of around 25,000 and 30,000 feet.

Seven pilots ages 27 to 55 entered the altitude lab in two waves. All were in generally good health, and we measured our blood’s oxygen saturation in the high 90s before the exercise. We entered the high-altitude lab with a pulse oximeter, clipboard, and a plastic bin of hardware fasteners, and donned oxygen masks at our seats. When we took them off, we would have an opportunity to gauge our ability to perform simple tasks—screwing nuts onto a bolt, alternating with washers, and signing our names—as our oxygen saturation ticked lower on the pulse oximeter display. 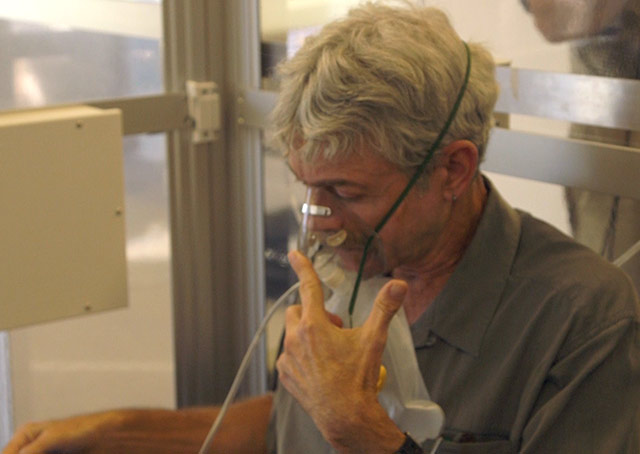 “It’s a cornucopia,” he said. “These are the big ones, but there’s others.”

I watched in anticipation as four of my colleagues began to show signs of hypoxia. Some fixated on the task of the nuts and bolt, one reported diminished peripheral vision, and Pinnell felt one pilot’s hand and reported it had gone cold. Safely breathing through a cannula himself, Pinnell had three pilots put their oxygen masks back on, and the 27-year-old lasted a bit longer before displaying signs of euphoria. Pinnell, who takes Western Michigan students through a similar experience as part of a physiology course, said it’s common for younger people to last longer before their oxygen drops, and then have symptoms come on quickly.

My turn came. I entered the chamber with two other pilots, this time at around 25,000 feet so AOPA Live Executive Producer Warren Morningstar would have a little more time to get the whole thing on video. We took our masks off and waited.

There were no blue fingernails, no tingling in the fingers. I had no headache or visual impairment. The primary clue that I was succumbing to hypoxia was a feeling of wooziness. Within about two and a half minutes, my oxygen saturation had dropped from 99 percent to the mid-70s and Pinnell instructed me to don my oxygen mask.

Pinnell later told me that I had looked mentally foggy, and I think I had to focus a little harder on spinning the nut around the threads of the bolt as my oxygen depleted. Would I have recognized these symptoms in time to don oxygen and descend if they had appeared on a long cross-country flight? I’d like to think so, but it would be easy to dismiss them as effects of fatigue or dehydration if I weren’t primed to connect them with dropping oxygen levels.

Knowing what to look for in myself is a good first step. It’s also prudent to pay attention to signs of the condition in others in the cockpit, according to Pinnell, since you may be next. (One of my colleagues in the altitude chamber developed a slight tremor in his hands, which could have cued me in to a condition affecting all of us if we had been in unsuspecting cruise flight.) And recognizing when hypoxia is likely to happen can help a pilot be in front of it. Altitude is the most obvious risk factor: As altitude increases, air pressure drops and oxygen molecules become few and far between. “We really were born and bred to be at sea level,” Pinnell said, but up to 10,000 or 12,000 feet the human body can adapt pretty well. From there up to about 50,000 feet, one is flying in the “deficient zone” where there isn’t enough oxygen to fuel the body.

Private pilots have studied FAR 91.211’s requirements for supplemental oxygen, and that one may legally fly at a cabin pressure of 12,500 feet msl to 14,000 feet msl for half an hour before using supplemental oxygen. But legal isn’t always safe, and a number of factors affect pilots’—and passengers’—susceptibility to hypoxia.

Remember that hypoxic hypoxia, the kind brought on by insufficient oxygen available to the lungs (as at altitude), is only one of the four kinds, and they may have cumulative effects. Hypemic hypoxia may be caused by a chemical like carbon monoxide or condition like anemia interfering with the blood’s ability to carry oxygen. Histotoxic hypoxia is more common than many people think, Pinnell said; it occurs when the cells can’t use the oxygen delivered to them, and may be caused by alcohol or drugs, even prescription drugs. Poor circulation or decreased blood flow from cold temperatures may cause stagnant hypoxia.

Now, imagine an airline passenger in his or her 70s or 80s who is not in great physical condition, Pinnell said. The passenger is on one or more medications and has chronic kidney disease, so is already anemic. Make that person sit for long periods of time at a cabin altitude of 8,000 feet, and all four types of hypoxia are working against him or her.

Factors like age, physical fitness, smoking, illness, drug or alcohol use, and fatigue may affect an individual’s susceptibility to hypoxia. Pinnell said good physical condition, a nutritious diet, avoiding alcohol and drugs, and using supplemental oxygen can help prevent it. “Anything that makes you healthier will help with your altitude tolerance,” Pinnell said.

Still, no one is immune, and Pinnell said there are always surprises in the altitude lab. Regardless of age or fitness level, dropping oxygen levels is a serious in-flight emergency, and the pilot should get oxygen and get down to a lower altitude.

The two fatal accidents that drew attention to the issue of hypoxia recently—one involving a Cirrus SR22T and another a TBM 900 —underscored the seriousness of hypoxia if left unaddressed. Indeed, the Air Safety Institute’s David Kenny (who participated in the high-altitude exercise) noted that if the condition progresses to an accident, it’s almost always fatal. In the 10 most recent years with complete accident data, 2003 through 2012, nine accidents were definitively ascribed to hypoxia or carbon monoxide poisoning. Eight were fatal, with 21 total deaths. (Hypoxia has been strongly suspected in a number of other cases, but wasn’t proven definitively, often because the aircraft and occupants weren’t recovered.) Here’s the good news: Recognizing the onset of hypoxia early can turn a potentially deadly incident into a safe landing. In the compensatory stage of hypoxia, recognition will allow recovery. If it progresses to the disturbance stage, with more severe symptoms, one may recognize the symptoms but not care.

If hypoxia is suspected, supplemental oxygen should be the immediate response, Pinnell said; but don’t depend on the systems. Get to a lower altitude immediately.

The ATC audio of a hypoxia encounter that reached the brink of tragedy dramatically demonstrated the serious nature of hypoxia, as well as the potential for turnaround. The pilot of Kalitta 66 showed serious signs of hypoxia, speaking slowly and slurring his words with the sounds of sirens in the background. When ATC recognized the problem and cleared the aircraft to a lower altitude, the radio calls from the airplane became more understandable and returned to the rhythm of normal radio transmissions. The flight landed safely.

Catching hypoxia much earlier is preferable, of course, and the solution fits neatly on your finger: A pulse oximeter may cost $35 online, Pinnell said, and can cue pilots in to dropping oxygen levels in time for them to take action. “If you do any high flying, there’s no excuse not to have one,” he said.