Hypoxia may have been a factor

Ronald Hutchinson was about 138 nautical miles from his destination in Virginia on Aug. 30 when air traffic control lost contact with the longtime pilot. Hutchinson, alone in his Cirrus SR22T headed southeast over Pennsylvania, had descended to 13,100 feet minutes before radio contact was lost, and he may have succumbed to hypoxia, according to an expert on the subject who was briefed on the flight data.

Hutchinson’s Cirrus, showing no signs of commanded flight based on position and airspeed data logged by FlightAware, penetrated the restricted airspace around Washington, D.C., while still cruising around 13,000 feet, having passed the flight’s intended destination without changing course. Fighter pilots scrambled to intercept the Cirrus and reported that Hutchinson appeared to be unconscious, according to various media accounts. 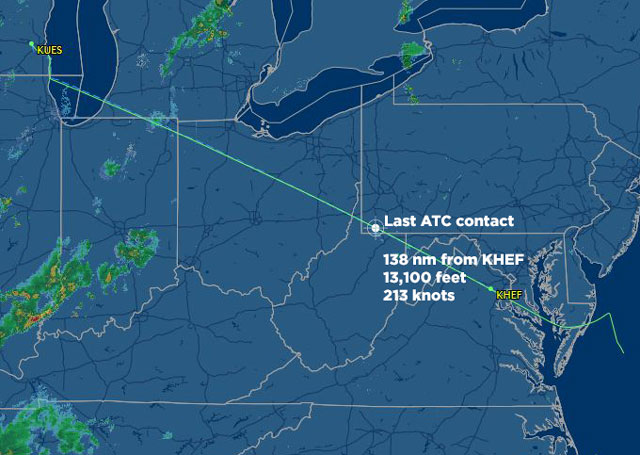 Hutchinson's Cirrus crashed about 50 miles southeast of Wallops Island, Virginia, more than two hours after Hutchinson was last heard from, the FAA said in a brief statement. FAA staff referred additional questions about the ill-fated flight to the NTSB, which is investigating.

Hutchinson, 67, was a longtime executive at Harley-Davidson, retiring from the motorcycle maker in 2009 after nearly 35 years of service to the company, according to a local media account apparently based on information provided by Hutchinson’s family. He had logged more than 4,000 hours in nearly 40 years of flying, according to that report. Hutchinson worked as a consultant and was chairman of the board of directors of a nonprofit organization dedicated to helping people with visual impairment find work in manufacturing.

The U.S. Coast Guard suspended its search Aug. 31. A fisherman had recovered a wheel and the cowling from Hutchinson’s Cirrus, and turned it over to the Coast Guard cutter searching the area, but no other signs of the missing Cirrus were found.

Aside from small variations, Hutchinson’s Cirrus would maintain 13,100 feet throughout the rest of the flight, until the aircraft apparently ran out of fuel.

Glenn B. King, an aviation physiology expert at the NASTAR Center, which provides advanced training for civil aviation, military aviation, and spaceflight, said Hutchinson's recorded flight profile is consistent with what would be expected in case of an oxygen system failure at high altitude. While it is not yet clear if Hutchinson reported oxygen problems, or requested a lower altitude, King (who supervises training in NASTAR Center’s altitude chamber, and also conducts research on hypoxia) said the air at 13,000 feet is still too thin for an already hypoxic pilot.

The FAA requires flight crews to use supplemental oxygen if spending more than 30 minutes at cabin pressure altitudes above 12,500 feet, and at all times above 14,000 feet.

The aircraft’s track continued straight over Hutchinson’s intended destination of Manassas Regional Airport and through the Washington D.C. area. The U.S. Air Force F-16s scrambled to intercept the flight stayed with the Cirrus until it ran out of fuel and crashed.