Get the app Get the app
Already a member? Please login below for an enhanced experience. Not a member? Join today
News & Media Voters Decide campaign plans election push for Santa Monica 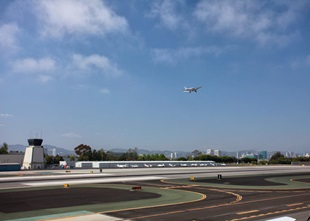 Santa Monicans for Open and Honest Development Decisions is making a pre-election push in support of a ballot measure that would put the future of Santa Monica Municipal Airport into the hands of the voters.

Measure D would require voter approval before Santa Monica Municipal Airport can be closed or the property redeveloped. But the city of Santa Monica has offered its own competing initiative, Measure LC, which would keep control of the airport’s future in the hands of the city council.

Many voters are wary of giving the city council too much control over the airport’s future. Through the years, various council members have been involved in efforts to close the airport and redevelop the property. Tactics used by airport opponents have included attempts to restrict aviation uses of the airport, lawsuits, and selling sections of airport land.

“Measure D is an insurance policy for the people of Santa Monica,” said Bill Dunn, AOPA vice president of airports. “The last thing Santa Monica residents want is to see that airport converted into a high-density development that will bring more congestion, traffic, and headaches. Measure D will prevent developers from going around the voters to get what they want—227 acres of airport property in the heart of Santa Monica.”

The controversy over the mayor’s involvement with developers formed the backdrop for a new campaign advertisement from the supporters of Measure D.

The ad, along with direct mailings, information sessions, and coffees are among the ways supporters are ramping up their efforts in the final weeks before the election. Santa Monicans for Open and Honest Development Decisions, in conjunction with the Santa Monica Airport Association, has scheduled an Oct. 22 information session at Justice Aviation to provide an update on the campaign. The event will take place from 7 to 8 p.m., and participants can volunteer to be part of an election day “poll watch” program.

AOPA is strongly supportive of Measure D and has long been engaged in the effort to protect historic Santa Monica Municipal Airport. The airport is not only a significant economic engine for the community but is also a bellwether for more than 200 other airports established under similar federal land agreements following World War II. Santa Monica Municipal Airport also acts as a vital general aviation reliever airport for nearby Los Angeles International and other airports in the congested LA Basin.