Get the app Get the app
Already a member? Please login below for an enhanced experience. Not a member? Join today
News & Media Watsonville Fly-In marks golden anniversary

When it comes to celebrating aviation, the folks in Watsonville, California, don’t take a back seat to anyone—and that doesn’t just mean the core group at the Watsonville Municipal Airport.

The annual Watsonville Fly-in and Airshow is a community-wide festivity, with volunteers from town coming out to help, a local high school student, Jasmin Samudio, designing a poster selected by the fly-in's board to publicize the event; and a local food bank, Second Harvest, benefiting from donations that in return gave the donor a break on the price of admission. 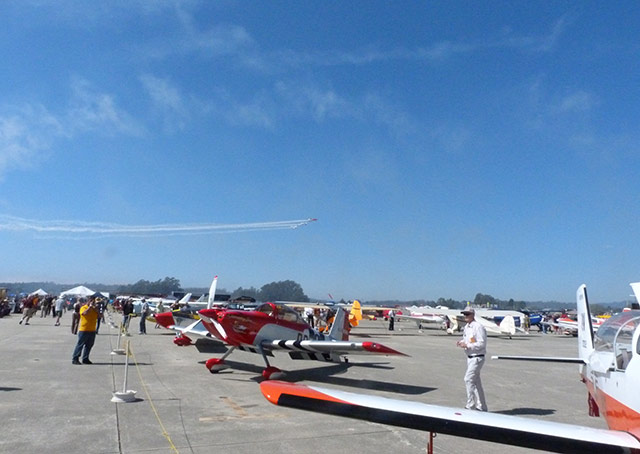 That’s been the spirit in Watsonville since 1964, whether the event was held on a Memorial Day weekend, or around Labor Day, or—as now—during Columbus Day weekend as a way of ensuring that a coastal fog condition known to local pilots as "the June gloom" (for when it begins to affect flying conditions) won’t interfere.

That bet on scheduling paid off big for the Watsonville Fly-In and Air Show’s golden anniversary event held Oct. 11 and 12. An extended aviation family estimated at 5,000 people turned out in spectacular fall weather to take in the flying; inspect aircraft competing for a variety of best-of-show awards; enjoy a military simulator experience; take in a classic car show; see a screening of the movie Planes; and, of course, go booth-hopping to savor a variety of foods.

AOPA was a sponsor of the nonprofit Watsonville Fly-In and Air Show event, and was represented by Lauren Otto, the association’s marketing director, and John Pfeifer, AOPA’s Western Pacific regional manager.

Theresa Byers, who works on special projects for the Watsonville airport, said she looks forward to the day each year when old friends come together.

"I saw people I hadn’t seen in years," she said. "But they did come out for the fiftieth."

From pancakes in the morning to a Saturday evening awards barbecue, and from formations to fly-bys, the schedule was packed with flight demonstrations; fun in the "Kidz Zone" (for those eligible); and rides in warbirds, helicopters, and a tethered balloon.

A memorial tribute was paid to stunt pilot Eddie Andreini, 77, who was lost in an accident while performing in his Stearman biplane at Travis Air Force Base on May 4. Andreini had "flown in 49 of our airshows," Byers said, adding that he had been on the schedule for the fiftieth as well.

AOPA’s staffers hosted an informational booth where they met many pilots. "We received a lot of 'thank-yous' from members for being there," sad Pfeifer, who added that interest continues to run high in the very successful AOPA Regional Fly-Ins. The final AOPA Regional Fly-in of 2014 will be held at Malcolm McKinnon Airport in St. Simons, Georgia, on Nov. 8.

'A family of its own'

Theresa Byers was living in Los Angeles in the 1970s when, on a Memorial Day weekend, she launched on a pleasure flight up the coast to Watsonville and Scotts Valley. She had hoped to land in Watsonville, but a temporary control tower was in effect, and she was informed that the airport was closed.

Later she returned to Watsonville for a weekend visit.

“A year later I was working here,” she said in a phone interview from the office of the (usually nontowered) Watsonville Municipal Airport. “This is God’s Country, just a really nice area.”

Byers is a self-described pleasure pilot who makes “big holes in the sky” as the owner of a 1960 Cessna Skylark. That’s the Model 175, a Skyhawk-family aircraft with a geared 175-horsepower Continental GO-300C engine, manufactured from 1958 to 1962.

What’s special about her home airport?

With two runways, and located just a bit inland from Monterey Bay, Watsonville has a country feel, but it can be a busy place. The airport is home base to about 400 aircraft, including several bizjets, she said.

But most of all, “I love the fact that it is non-tower.”

Byers works on special projects for the airport, but on this fall day the temperature is still in the 60s, and she would rather be out flying, or at least spending time outdoors, fueling airplanes, working on the ramp, chatting with whoever may taxi in next.

“Flying is kind of a family of its own,” she says. 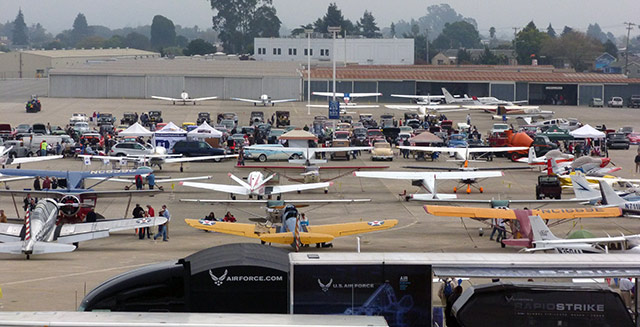