Back to the airport

Returning pilot pitches in for the Elk Flyers

A 17-year absence from flying didn’t stop Bill Laird from quickly achieving one of aviation’s coveted honors upon his return.

The retired military man from St. Marys, Pennsylvania, will soon have his new status in writing—when his wife Rochelle gets around to ordering the "Airport bum" T-shirt she told him she planned to buy.

"I hang out at the airport all day, as long as I’m home by four o’clock. I have to pick my wife up at four o’clock," he said in a recent telephone interview.

Well, that’s not the complete story of Laird’s re-emergence on the aviation scene at St. Marys Municipal Airport in rural Elk County, Pennsylvania. A take-charge kind of guy, he has already found himself becoming a leader of the Elk Flyers Inc., the organization that gave him a route back to the cockpit. He emphasizes, however, that he sees himself serving in a caretaker’s role until the club elects a new chief executive.

Pending that transition, "I am considered the vice president," he said.

These days the Elk Flyers group consists of about 15 full-time members, and a handful of associates. The flyers' fleet includes a Piper Archer II and a Cessna 172. The Skyhawk is currently out of service, with some major engine work ahead.

Decisions facing the club now include weighing the fiscal impact of repair alternatives. Selling the Skyhawk after repairs is on the table. But like many flying groups, the Elk Flyers has its low-wing advocates and its high-wing fans, so there is some constituent pressure to focus on growing the club’s membership with both airplanes on hand. 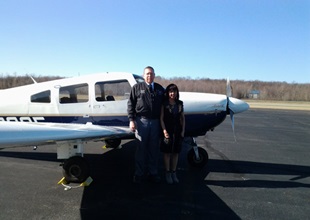 Laird was aware that AOPA has launched an initiative to strengthen the community of flying clubs, and thereby grow the pilot population. He recently contacted the association for information about how the Elk Flyers could address its future needs.

The for-profit Elk Flyers group got its start in 1982. These days it is mostly an older segment of the pilot population of pilots that makes up the group’s roster—a demographic reality in an area Laird calls "the powdered metal capital of the world" with respect to the type and number of manufacturing plants that once operated in the region.

As times changed, many of the local young people moved away in search if employment opportunities. Now, Laird said, most members of the Elk Flyers are day-VFR single-engine pilots who launch on local flights. There is one professional pilot in the membership, as well as a Korean War fighter pilot now an octogenarian, Laird said.

Retired after 28 years of military service, Laird connected with the Flyers after years away when "my son was racing dirt bikes, and I couldn’t do both."

Hooking up gave Laird "something to fly," thanks to the Elk Flyers’ reasonable membership and flying costs. Now, with free time available and the organization hungry for active members, Laird sees his aviation horizons expanding. Recently he started planning to take his flight instructor knowledge exam, with a goal earning his instructor certificate to make sure there will always be a CFI available to attend to club members' needs. An AOPA Rusty Pilot Seminar is also in the works next year at St. Marys Municipal, he said.

A favorite outing for pilots taking off from the 1,934-foot-elevation, 4,300-foot runway in the southwestern corner of the Duke Military Operations Area (the MOA floor is 8,000 feet msl, so not normally a factor) is a mission "to go sightseeing and look at the elk."

Yes, there are elk in Elk County, located in the northwestern portion of central Pennsylvania. The extinction of eastern elk during the 1880s was followed by the reintroduction of western animals beginning in 1913. The Elk Country Visitor Center describes itself as "home to the largest wild elk herd in the Northeastern United States."

History and a spectacular natural vista provide another mission plan from St. Marys: Just a few miles north of the airport is the Kinzua Bridge Skywalk, completed in 2011 on the site where a railroad viaduct had spanned the Kinzua Gorge until 2003, when a storm destroyed the structure—known as the longest and tallest railroad span. Stunt pilot Odo Valentine flew a biplane under the viaduct (designed by engineer and aviation pioneer Octave Chanute) on July 4, 1939. Valentine, who will become 100 years old in December, is still a member of the St. Marys Municipal Airport community.

Whether you like to view wildlife from the air before breakfast, or after, Laird assures a prospective visitor that one’s appetite will be sated in fine style at the West Wind Restaurant on the airport.

A touch of history, affordable flying, unique sightseeing, a good meal, and a community of pilots: Isn’t that what general aviation is all about?

It’s pretty clear from a conversation with Laird that he is finding his return to aviation worth the wait, and clearly it has been a plus for his airport’s flying club.

That is to say, he has earned his T-shirt.

Dan Namowitz has been writing for AOPA in a variety of capacities since 1991. He has been a flight instructor since 1990 and is a 35-year AOPA member.
Go to Dan Namowitz's Profile
Topics: Flying Club, Aviation Industry