Get the app Get the app
Already a member? Please login below for an enhanced experience. Not a member? Join today
News & Media Simulated attack

Canyons and mountainsides obscured by billowing clouds of smoke, the abrupt loss of weight and shifting center of gravity that follow release of a load of retardant, unusual attitudes and dangerous terrain: These are among the everyday challenges faced by firefighting pilots, and virtually all of them can be simulated.

Mark Kutch and Juan G. Mendez launched SimCheck International in 2010, and soon found themselves (at the request of one of their launch customers) crafting scenarios tailored to mimic the challenges of real world firefighting, including radio communications with forward controllers, realistic and accurate terrain, low visibility and nasty weather. 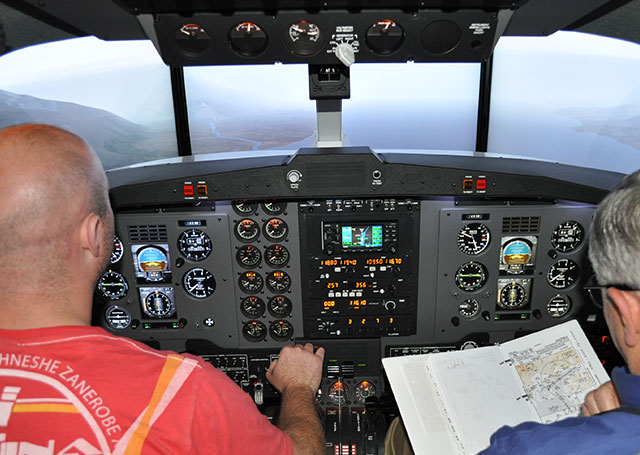 There has been plenty of the real thing to go around this year, particularly in the Pacific Northwest. The fire season there started early and accounts for much of the 2.7 million acres burned nationwide as of Sept. 3, according to the U.S. Forest Service, which reported six major fires remained active in Oregon and Northern California. 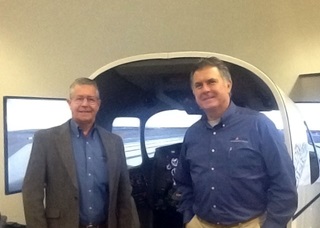 Contractors have nonetheless been busy in the northwest, and expanded aerial firefighting fleets, both fixed-wing and helicopters, some hiring additional pilots to help meet the demand. Fire seasons have extended later into the fall in recent years, and that trend is expected to continue.

"There is no question that the wildland fire danger is increasing in areas of the country where the risk had historically not been as great," said Tom Eversole, Executive Director of the American Helicopter Services and Aerial Firefighting Association, in a news release Aug. 25.  "The privately operated aerial firefighting industry has long demonstrated that it has the resources to meet the wildland fire threat anywhere, especially we are experiencing longer, more destructive fire seasons."

The industry will need to train—and retain—more pilots to meet that demand, and their initial and recurrent training is where SimCheck International sees an opportunity to help.

They seek a high level of realism. Releasing 1,200 pounds of simulated retardant from a virtual King Air 200 causes an instant reaction, flight characteristics changing based on the new weight and balance. That is only the beginning.

“Maybe they lose an engine as they climb out, unfortunately,” Kutch said in a telephone interview, adding that the pilot of the stricken aircraft learns next that the nearest airport, perhaps the one in Boise, Idaho, is “closed due to thunderstorms.” The pilot must now find a suitable alternate and get there, and communicate with instructors, demonstrating ability to execute correct procedures in the midst of mounting stress.

Kutch does not sound particularly sorry about that misfortune. He credits Mendez, the vice president of operations and chief flight instructor, with making it happen.

“I’m sure glad I’m not the one going through this because Juan dreams up some doozies,” said Kutch, who is an airline pilot, of his business partner. “He is the maestro.”

The goal is not to torture students, but to present them with realistic challenges—and an opportunity to fail without being killed for it. Mendez said the high-fidelity replication of the cockpit—including “control loading” feedback from the flight controls—combined with the detailed visuals of a digital world complete with towering flames make the training seem very real.

“We are able to create as much realism as is reasonably and practically speaking possible,” Mendez said.

SimCheck is based at the same location as Precision Flight Controls, and leases advanced aviation training devices made by the company to train students. Kutch echoed the views expressed across the industry earlier this year, decrying the FAA decision to limit the amount of simulator time that can be used toward qualification for certificates and ratings. Firefighting scenarios and other custom courses are only part of the wide range of offerings from SimCheck, which is also authorized to screen King Air pilots for insurance companies. They offer upset recovery, instrument, and other types of training for corporate clients—many of whom will never approach a massive fire or need to plan their escape from it. Kutch said the FAA has ignored “huge leaps in realism and technology” in limiting the use of A-ATDs for aviation training.

Firefighting clients practice some maneuvers and procedures common to many aviators, such as instrument approaches, but much of their typical three-day program schedule is filled with more specialized tasks—such as planning their route to the target area, and also planning how to depart the target area after a drop without hitting mountains that may be shrouded in smoke. They may also find themselves in highly unusual attitudes, and just about any system is subject to failure rates far higher than the real-world fleet. Emergencies are the order of the day.

“We see that it is productive training,” Mendez said. “If they don’t get it right the first time we just simply repeat it until they do get it right.”

He added that while bird strikes can be added to the mix, care is taken to create what the company terms “an appropriate professional challenge,” with a level of distraction and task saturation suited to the experience and mission of each pilot. The instructors “adjust that pilot workload in such a way that the pilot achieves optimum learning,” Mendez said. “What we try to do is keep each session very productive in terms of learning.”